Amendments to registration act held off 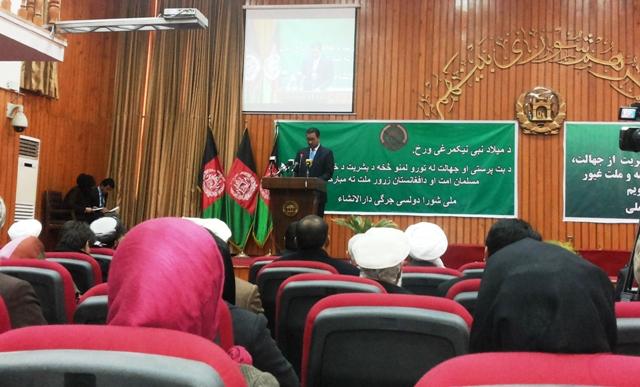 Amendments to registration act held off

KABUL members on Monday accused the house Interior Security Commission of illegally holding off a draft amendment bill to the Population Registration Act.

The interior security commission was scheduled to present before the lower house a set of amendments to some articles of the controversial act on Wednesday last.

After being approved by the assembly, the Population Registration Bill was signed into law by President Ashraf Ghani amid objections from some lawmakers, civil society groups and political parties over not mentioning word “Afghan” in the Computerized National Identity Cards (CNICs).

As the protests continued, the president referred the issue to the Supreme Court, but the apex court is yet to deliver a ruling in this regard.

The issue of bringing amendments to the law became a hot topic in the lower house after some members proposed changes to the law’s article three and six. The MPs insisted words “Afghan” and “tribe” should be mentioned in the ID cards.

Bowing to continued insistence by some MPs, Speaker Abdul Rauf Ibrahimi asked the Interior Security Commission to prepare amendments to the act and present them before the house for a decision.

But Kamal Nasir Osoli, who heads the Education, Religion and Culture Affairs Commission, told Pajhwok Afghan News the Interior Security Panel had held off the draft amendments on the basis of prejudice and under pressure from some elements.

He said the panel was supposed to make ready the amendments and should have forwarded them to other panels for passing legal phases, but it did not do so.

“Our commission conducted an illegal ballot on whether or not to send the draft to other commissions for debates. Except me, all voted in favour of not sending the draft. But this decision is illegal because the panel has no right to take such a decision,” he added.

He said the draft should be sent to other house commissions for discussion before tabling it in the assembly.  Mangal said he had discussed the issue with his colleagues and the issue would be raised on the assembly floor soon.

Wolesi Jirga deputy secretary Irfanullah Irfan said the assembly had tasked the Interior Security Commission to prepare the draft amendments in line with the house decision. He confirmed the panel was yet to inform the administration board about the task it had been given.