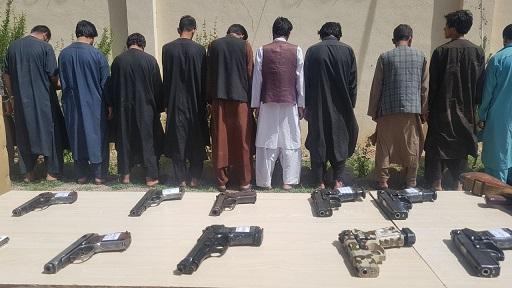 KABUL (Pajhwok): On average, 51 crimes, mostly robberies and murders, happened on a daily basis in Afghanistan during the past five years, the Ministry of Interior said on Sunday.

During the period, the Afghan forces seized more than 6,200 weapons, above 60 tons of drugs, thousands of liters of alcohol and prevented around 77,200 criminal cases and detained around 115,000 people in connection with different crimes.

This information was presented by general recruitment chief at the Ministry of Interior, Col. Amanullah Chamto during a consultative meeting with Kabul police officials and some people here today.He stressed people’s cooperation with police in controlling criminal incidents.

Col. Amanullah Chamto said nearly 1,600 of robbery cases included burgling, more than 13,300 stealing of goods, more than 5,100 cases of vehicle theft and nearly a thousand cases of armed robbery and 29,047 other criminal cases had been registered with the ministry over the last five years.

He said nearly 77,200 criminal cases were detected before happening and nearly 115,000 people arrested in connection to them over the same period.

Nearly 16,500 cases of injury, nearly 10,300 cases of property theft, nearly 8,200 cases of murder, nearly 5,300 cases of drug smuggling and a number of other types of crimes were detected by the ministry.

However, the official did not provide details about the specific years these incidents happened.

He said more than 4,500 criminal cases happened during 1396 solar year and more than 3,400 cases in 1397 solar year in Kabul which show a 24 percent decline in the cases compared to the previous year.

Chamto said 541 local councils were created in Kabul for building public trust and cooperation with security forces for maintaining security and prevention of crimes.

Detection and seizure of weapons

The official said more than 6,200 different types of weapons, a vehicle full of explosives, four suicide vests, 205 vehicles belonging to criminals and some ammunition were seized during the last five years across the country.

Chamto said 43,000 liters of alcohol, acid, and chemical and more than 7,300 intoxicant tablets, more than 60 tons of other narcotics were seized in the last five years.

The MoI says the four decades of war, poverty, joblessness, personal enmities, presence of illegal armed men, weapons smuggling and some others were the factors behind crimes in the country.

Acting head of the recruitment police headquarters at the Ministry of Interior Affairs (MoIA) said lack of a joint commission to be consisted of the ministries interior, information and culture, Hajj and religious affairs, lobar and social affairs, higher education, Kabul municipality and others government organizations and lack public awareness programs were major challenges in this regard.

He said illegal weapons with a number of high profile government figures was another reason behind the increased crimes in the country.