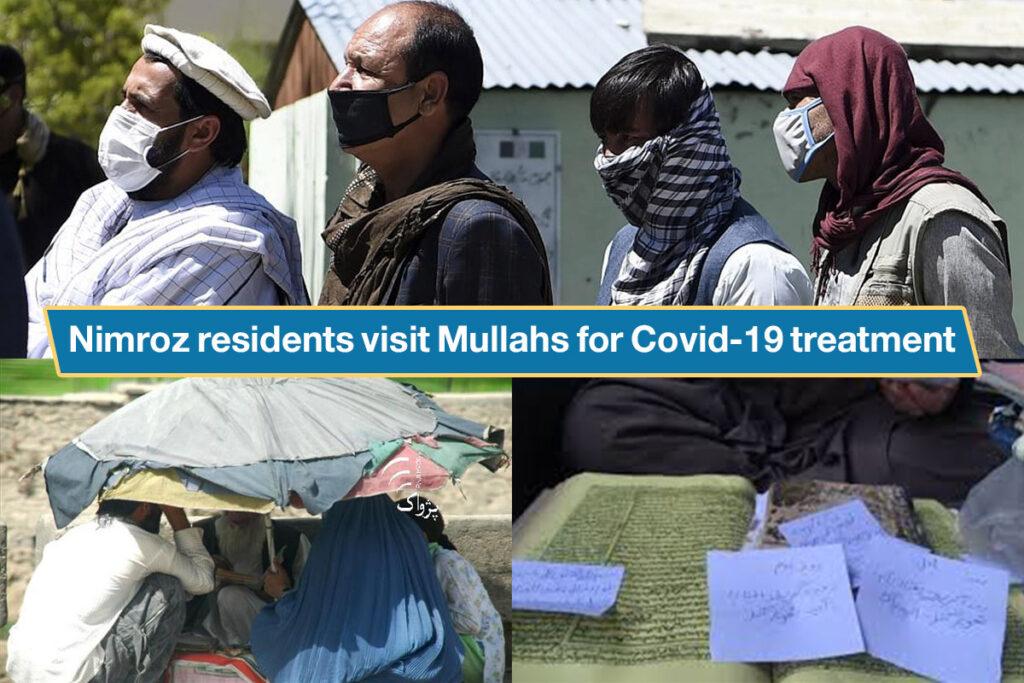 ZARANJ (Pajhwok): Some residents of western Nimroz province are deeply concerned about the second wave of Covid-19 pandemic and used to visit religious scholars for Tawiz and Doua to prevent and treat the disease.

After emerging in the Wuhan city of China last December, the Covid-19 virus has spread to at least 210 countries around the globe. The US tops the list of countries with most cases, followed by India and Brazil.

According to the Ministry of Public Health so far (Nov 10).

In the past, up to a thousand positive cases would emerge on a daily basis in Afghanistan but now dozens of cases are being registered daily, which, according to the MoPH, could lead to a second wave of the disease if people do not pay attention to health guidelines seriously.

Pajhwok Afghan News findings show the possible second wave of the coronavirus has worried some residents of Nimroz province and they go to mullahs for getting Tawiz and prayers for prevention of the pandemic.

Fatima Habibi, a teacher at a school and a resident of Masumabad village of Zaranj city, the provincial capital, said: “Every day, it is announced that the second wave of the coronavirus is on the way, thus I am very worried that I and my family will get this dangerous disease.”

She said for the above reason, she and her family members went to Maulvi Haji Saeed in Zaranj city and received Doua from him to avoid the Covid-19.

She said, “The virus must be prevented before it infects us, so we received a Doua, there is healing in the Holy Quran has an effect, we had already used his Doua for other diseases and had good impact.”

According to her, Haji Saeed does not ask for money but whenever they visit him, they give him about 200 afghanis each time.

Maulvi Haji Saeed said dozens of people visited him every day and he read verses from the Holy Quran and those who diagnosed with Covid-19 disease had been recovered and those not yet infected will not contact the disease.

But he told all patients coming to him to follow the MoPH health instructions and visit doctor if the disease worsens.

He said he is not asking for money from people but when they give him money on their own, he does not reject it.

FareshtaMalki, a resident of Mahajar Abad area of the provincial capital, told Pajhwok she was deeply concerned about the second wave of the pandemic thus visited a mullah in her area to receive a Doua for the prevention of the Covid-19.

She also took her three children to the mullah but declined to name him: “The Doua has a significant result and advantage.”

“I had a sore throat, coughing and body pain, we came to Mullah Sahib who gave us a Doua. Believe in me, before we left the mosque, my pain disappeared.”

Gul Ahmad, a resident of Masoudabad village, said: “When I got infected with the virus, our neighbors told me about a Tawiz maker Aqa Sahibi and I also visited him and received a Tawiz from him and after a few days, I recovered.”

He said still a number of his relatives and neighbors visited the said Tawiz maker to be protected from the virus in the second wave.

According to him, people give 200 afs to 500 afs to the Tawiz maker against each Tawiz.

Aqa Sahibi, the Tawiz maker, without going into details, said: “We do not act against religion, I inherited this practice from our fathers and grandfathers.” He confirmed taking money from people against each Tawiz.

Khalil Ahmad Tokhi, a civil society activist in Zaranj city, said people were concerned about the second wave of the Covid-19 and therefore they visited religious scholars and Tawiz makers.

He said, “I have seen many people with signs of the virus visiting mullahs and Tawiz makers instead of doctors in the province.”

Mufti Shamsurrahman Farotan, a religious scholar, says: “if someone visits a Tawiz maker and asks him for a Tawiz, this is not allowed in Islam and is against the teachings of Quran and Hadith.”

He stressed compliance with medical guidelines for Covid-19 treatment and added: “If a person goes to a religious scholar for Doua and ignores medical guidelines, instructions and skip doctorm then this is against the teachings of Islam. The Prophet (PBUH) 1,400 years ago stated that anyone who sneezes should cover his face with both hands and this is an example of precautionary measures.”

Maulvi Hizbullah Maulvizada, head of the Hajj and Religious Affairs, expressed similar view and said: “Allah (SWTA) says that sickness comes from the side of Allah and Allah treats people as well and there should be no doubt in it. But Allah created medicines for every illness. During the era of Prophet (PBUH), sick people would use and get treatment. During the Caliphs era there was an outbreak of pandemic and special measures were taken, even the leadership and one of them was quarantined and banned from large gatherings.”

Considering special orders from Caliph of the time, medical guidelines were strictly followed, doctors advises were heard and implemented and special prayers were made to Allah to eradicate the pandemic, he recalled.

Maulvizada asked the people of Nimroz to stop visiting individuals who offered Tawiz, adding that certain people was committing Sherk.

Efforts were made in the past against Tawiz sellers and similar efforts would be made in future to stop such individuals from fleecing people, he said.

“The second wave of coronavirus has begun. We did not record positive case in the past two months but now again more positive cases are surfaced. We want the people of Nimroz to follow medical guidelines.”

According to information until Nov 10, in Nimroz 424 positive cases have been registered and of them 382 people have recovered and 11 died.  Recently 31 positive cases surfaced in the province and these patients have not yet recovered.