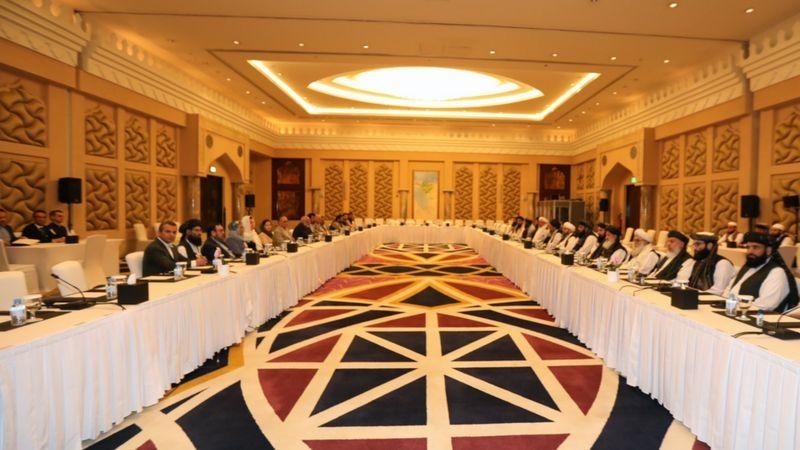 KABUL (Pajhwok): Reuter’s news agency has reported that the intra-Afghan talks that resumed in Doha a few days ago “are effectively on hold”, and some sources claim the talks have been stopped, but both the negotiating sides refuted the claims.

Ground rules for future talks have already been agreed between the both sides in Doha during the first round of talks while the second round of talks kicked off on January 7.

Azadi Radio claimed intra-Afghan talks in Doha had stopped, while Aryana TV, Azam Website, Kabul 24 website and some other facebook and twitter activists cited Reuters News Agency as reporting that the peace talks are on hold effectively as the negotiators negotiators wait for President-elect Joe Biden to signal whether he will stick to Donald Trump’s aggressive schedule to pull out troops.

Reuters report quoted a diplomatic source in Kabul that there may not be a significant progress in Doha talks until Biden swears in as the US President.

“We are waiting for the new US administration and their policies towards Afghanistan to see whether they would respect the peace accord,” a Taliban negotiator told Reuters on condition of anonymity as he was not authorised to speak publicly.

“If they don’t honour their commitment of withdrawing their forces as promised…then we would need to make tough decisions by appointing hardliners to key positions on the ground.”

NajiaAnwari, spokesperson for the State Ministry for Peace Affairs, said the talks between the Taliban and the Afghan team had not stopped.

Referring to low expectations of progress until Biden swears in as the US President, she said: “The US is Afghanistan’s strategic partner and Afghanistan has its own decision-making authorities in peace talks and will not wait for anyone.”

She said both teams were conducting meetings and discussing their agendas. Both teams have to do their work and they are doing it, said Anwari.

An Afghanistan negotiating team member, who did not want to be named, said: “We are working at normal pace and we have agreed that both sides will categorize their agendas and then both teams will meet and work together on agenda related issues. Talks are not stopped nor there is a stalemate, we have met and will meet again.”

FaridonKhawazon, spokesperson for the High Council for National Reconciliation (HCNR), rejected claims that the talks were on hold. He said the Afghan negotiating team had conducted their internal meetings and discussed agenda related issues in meetings with the Taliban.

According to Pajhwok Afghan News report, the Afghan government and the Taliban teams held three meetings in the second round of talks but since Monday both teams have not met.

Another reason why meetings between the two teams did not take place was that some members from the Taliban side — Maulvi Abdul Hakeem and from Afghan side — Fawzia Kofi, Nader Naderi, MatinBaig and FatemaGilani – are not yet in Qatar.

Reuters reported now expectations of progress in Doha talks and some sources claimed the talks had stopped while both sides rejected any setback to the parleys.