Hakimi — advocating for justice and dialogue

Hakimi — advocating for justice and dialogue

FEROZKOH (Pajhwok): A 36-year-old resident of western Ghor province, having lost 11 relatives to the ongoing conflict, has so far mediated hundreds of disputes. Having prevented possible bloodshed, he believes the war can be ended only through meaningful dialogue.

Mohammad Hassan Hakimi is a resident of Qatas village, 15 kilometers northeast of Feroz Koh, the provincial capital. He is married and has four children.

Hakimi says he lives in a province where illegal armed groups, local strongmen and Taliban insurgents are active.

For the past 15 years, he has been working with elders to resolve disputes between families and ethnic groups. He has played a vital role in addressing a host of issues.

Hakimi has been able to resolve cases of violence against women, differences between ethnic groups, domestic issues, land disputes and a variety of local issues.

He has been trying to follow in the footsteps of his father, Mohammad Safdar, who also played a vital part in resolving ethnic disputes.

“As a tribal elder, my father put an end to ethnic disputes for several years. I also attended a string of meetings with civil society leaders and youth,” Hakimi adds.

Hakimi thinks resolving issues, especially those causing violence, is fruitful. He claims having resolved a case that might have morphed into a complicated dispute

“Last year, a dispute erupted between two major Sultanyar and Khudayar tribes over the implementation of a development project in Qatas area. About 600 tribesmen came out with spades and pickaxes. Several people were injured in the ensuing clash.

“When I came to know about the incident, I went to the scene. After hectic efforts, we managed to end the fighting with the help of local elders. The situation could have caused the killing of many people. But we won promises from both sides to help execute the project.”

The peacenik says the residents of Ghor mostly trust jirga. Because of widespread corruption, he noted, very few approached judicial organs and tried to resolve their cases through tribal councils.

Hakimi opines the ongoing war in the country has affected the performance of the judiciary as well as other departments, where widespread corruption can be seen.

Most of disputes in Ghor are triggered by land distribution and domestic violence. Besides leading to dozens of killings every year, such issues also result in financial losses.

While sharing his experience in dealing with such cases, he recalled: “Last year, a girl from Taimani tribe ran away with a young man from the Sultanyar tribe. People from the girl’s tribe took up arms, blocked roads and wanted to kill anyone from the man’s tribe.

“I reached the area along with several tribal elders, talked to the parties involved and convinced them into taking the case to court. At last, we succeeded in preventing possible bloodshed between the two tribes.”

Hakimi added: “I have resolved dozens of similar cases through mediation in a way that there is no longer enmity or violence between the parties concerned.

Mullah Nooruddin, a resident of Koz Qatas village, told Pajhwok Afghan News: “We had a piece of land in our village. We claimed its ownership but other tribes said it belonged to them.

“A clash erupted between us and several people were injured. Fortunately, however, Hakimi came to our village along with some elders and met both sides and the problem was thus solved.”

Saeed, a member of the Hazara community from Lal-wo-Sarjangal area, said his tribe opposed his daughter’s marriage to a man from Aimaq tribe. The Hazaras demanded dissolution of the marriage.

He acknowledged Hassan Hakimi’s ability to mediate between the tribes and resolve the issue amicably.

Saeed added: “The tribesmen came together and said “you have taken a wrong step. Either get your daughter divorced or leave the area. Go to Aimaq tribespeople.”

The issue was taken seriously even by police and district chiefs. “I approached to civil society leaders. Hakimi came to the district. In addition to talking to the tribes, he highlighted the issue in the media and said the government and people wanted to take action against Saeed.

“As a result, the district and police chiefs came to me, convinced the people and resolved the issue; otherwise I would have been forced into leaving the area”.

Hakimi stressed negotiations were the only way to resolve the Afghan issue and end 40 years of war. “Ending Afghanistan’s conflict requires sincerity of intent from the government and the Taliban.”

He described the Doha peace talks and the upcoming Turkey summit scheduled for next week as a good opportunity to achieve the goal of peace. He called on the parties to refrain from violence to end the long war in Afghanistan. The warring sides must be more flexible and courageous, Hakimi commented.

If the Afghan government and the Taliban do not seize the opportunity now, he fears the country will experience an even worse situation. 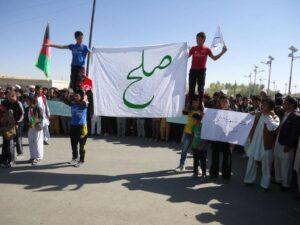 Hakimi hoped the same regional and international solidarity team should mount pressure on the warring parties to bring lasting peace to Afghanistan.

The Istanbul conference is an historic opportunity for ending the war, , according to the civil society activist, who said proxy wars to protect the interests of foreigners, sharp differences among leaders and waste of available opportunities were the main issues facing Afghanistan today.

Hakimi is one of thousands of grief-stricken people who have lost loved ones to the war. He said 11 of his close relatives had been killed over the past five years.

“These 11 close relatives, who have been killed in the war in the last five years, include my uncle, aunt and … sons. Each of these deaths has broken hearts of hundreds of our family members.”

Hakimi is the founder of the first civil foundation in Ghor and over time has earned the nickname of “Sada-i-Ghor”. He has become a well-known and respected figure due to his justice-seeking endeavours.

He has been calling for justice to strengthen peace efforts through various civil movements for nearly a decade and a half.

According to Hakimi, in addition to his role as a mediator of ethnic rows, he has also conducted artistic and cultural programmes to promote unity and harmony among the people.

He has traveled to all districts of the province to create unity among the people and called for justice at all levels to improve the security situation in Ghor.

He has been repeatedly threatened and even attacked by local strongmen for his role as a journalist and civil society activist.

Hakimi was recently attacked by gunmen on his way home from a party on March 28, but he survived the assault.

The civil society activist recently organised an exhibition of pictures with themes of peace and war in Ghor in support of the victims of freedom of expression. He sought an end to the war and establishment of lasting peace in Afghanistan. 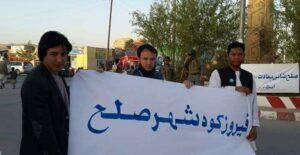 He believes life without peace has no value, no meaning. To him, life finds value only when there is peace.

In Ghor, Hakimi has organised dozens of meetings in support of Moscow, Doha and Istanbul conferences and a ceasefire between the government and the Taliban.

Mohammad Wazir Noorani, head of civil society in Ghor, said: “Hakimi has suffered due to the ongoing conflict and injustice in the country.

“He has sought justice, using national and international forums, to ensure lasting peace and stability in the country. I believe Hakimi has worked hard to build a peaceful society.”

Hakimi highlighted ubiquitous insecurity, road closures, poverty and dozens of other problems on an Azadi Radio program (Walayat), which featured the Ghor governor.

Reacting to his remarks, some residents of the province protested against Governor Noor Mohammad Koh-i-Noor, and set up a protest tent. They called for the removal of the governor. Hakimi said the sit-in continued for 28 days.

“People are very upset with the current situation in Ghor. Youth asked me to seek justice for the province. I spent eight nights under a tent until the government accepted our demand for the governor’s dismissal,” he explained.

Hakimi started his career as a journalist with a local radio station called Adalat Ghag) in 2007. Then he worked as a reporter for Pajhwok Afghan News based in Ghor for eight years. Later, he worked as an investigative reporter in IWPR from 2011 till 2019.

“Without any doubt, Hakimi’s investigative reports have changed things, having a positive impact on him. In a single sentence, I would say Hakimi’s ability is unparalleled.”

GhorHakimi -- a advocating for justice and dialogue
- Advertisement -