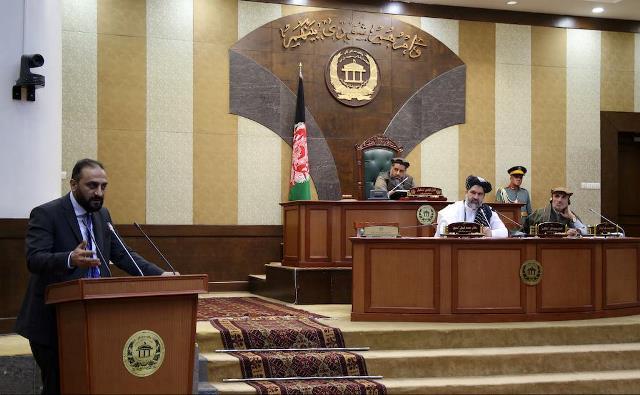 The ATRA acknowledged the salary and other monthly privileges of 700,000 afs to every leadership member of the authority and said the revenue went to the state treasury.

Ezidyar claimed he has evidence to support his claim regarding ATRA leadership monthly salary and privileges of 700,000 afs per head.

He termed the massive salary to ATRA members as injustice with common people and added the regulatory authority members received thousands of afghanis in form of credit cards as well.

He demanded details in this regard and added so far the people of Afghanistan were not sure if the amount of tax on mobile credit card reaches the state treasury transparently.

Some Mesharano Jirga members expressed their concern over suspension of mobile phone services during days and nights in different parts of the country.

Umar Mansour Ansari, head of ATRA, was summoned to the Mesharano Jirga to provide information regarding the 10 percent tax on mobile credit card, extravagant salaries for the authority leadership, problems being faced by people in mobile services and suspension of mobile services.

Without going into details, Ansari said salaries and other privileges of ATRA leadership and its employees were approved at the time of inception of this authority and appointment of employees.

“ATRA is not a budgetary unit and does not take fund from the government. We get our revenue from private sector and pay our own expenses. High salary and privileges are offered to ATRA employees to make sure its independence and that its employees are not impressed by private companies financially. In addition, every leadership member of ATRA is entitled to work for three years and after the completion of tenure they are not entitled to work in any other telecommunication company.”

He said high salaries and privileges were vital for transparent and effective management of ATRA and if not, the authority could not compete with private companies and even they may not be able to fine them in case of violation.

Referring to suspension of mobile services in parts of the country during day or night, Ansari said the matter was of concern and efforts are underway to resolve the problem.

He said ATRA was working hard in coordination with Governors, Police Chiefs and elders in the provinces to ensure the provision of mobile services.

He said with the establishment of Real Time system there is transparency in 10 percent tax on mobile card.

Ansari said last year Afghanistan collected 4.5 billion afs in revenue from 10 percent tax on mobile credit card while during the first three months of this year 1.5 million afs had been collected so far.