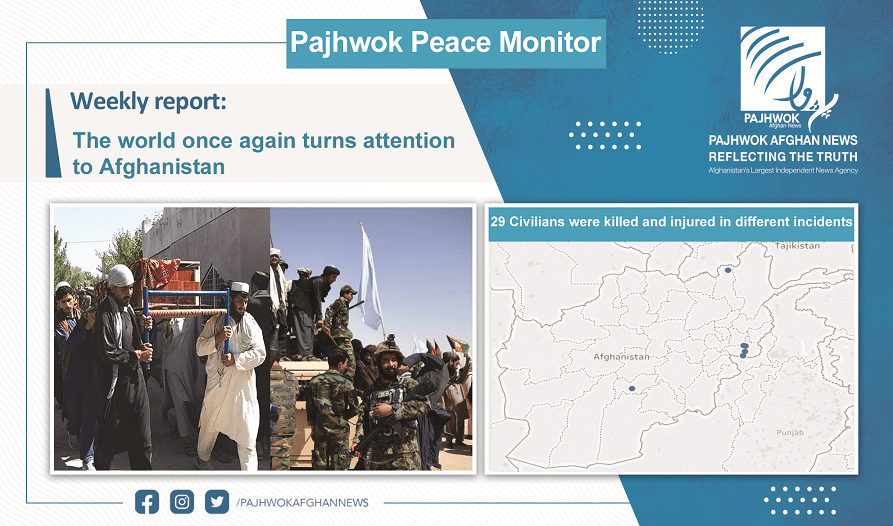 KABUL (Pajhwok): Two international conferences on Afghanistan were held last week and the international community’s response to Afghanistan, including the United States, was mostly positive, while explosions and attacks at home caused 29 casualties.

According to reports, nine people were killed and 20 others were injured in different incidents last week.

Local officials said that a bomb blast at a mosque in Spin Ghar district of Nangarhar province injured 15 worshipers.

Also in Jalalabad, the capital of Nangarhar province, three civilians were killed while a child was killed and another was injured in an IED blast in Hesarak district of the province.

More than 65 percent of last week’s casualties happened in Nangarhar, while 46 percent casualties of the previous week when 18 people were killed also happened in this province.

According to another report, a bomb blast in Tirinkot city, capital of Uruzgan province, killed three members of a family and injured five others. In addition, unidentified gunmen killed two former government soldiers in Chahab district of Takhar province. 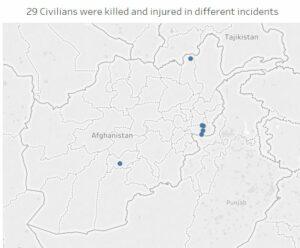 The previous week,18 people were killed and six others were injured in various incidents across the country.

Last week, US officials said they were preparing for the next round of talks with the Taliban in Doha and had consulted with NATO representatives in Brussels about recognizing Afghanistan’s caretaker government.

The Taliban captured Kabul on August 15 and announced a caretaker government on September 8, but so far, the government is yet to be recognized by any country.

The US special envoy to Afghanistan, who began a trip to Asia and Europe last week, said that an international consensus was needed to address security concerns in Afghanistan, ensure the rights of Afghans and help end the humanitarian crisis in the country.

ZabihullahMujahid, deputy information and culture minister and spokesman of the government, also said the caretaker government was ready to resume talks with the US in Qatar and welcomed all meetings on Afghanistan that work for stability and economy in the region.

The participants of the meeting expressed concern over the rise of “terrorist activities” in Afghanistan and called for the establishment of a joint counter-terrorism strategy. No one from Afghanistan was invited to the meeting and China and Pakistan refused to attend.

The counterterrorism issue was raised in the meeting following ISIS recent attacks in Kabul, Kandahar and Zabul provinces but the Afghan government says it would defeat the group.

Troika Plus meeting and Afghan delegation’s visit to Pakistan

Last week, a Troika Plus meeting on Afghanistan was held in Islamabad, hosted by Pakistan and attended by special envoys from the United States, Russia and China.

Tom West, the US’ special envoy for Afghanistan, who attended the meeting, said all sides at the summit emphasized that they would work with Afghans to form an inclusive government, and that the Taliban should live up to their promises to fight “terrorism”, as well as humanitarian assistance to Afghanistan will increase, and the rights of all Afghans, particularly girls and women, will be protected.

Shah MehmoodQureshi, Pakistan’s foreign minister said, “Afghanistan wants relations with the world, the world should provide humanitarian assistance to this country and its money should not be frozen.”

The delegation decided to create a joint committee to facilitate trade and commerce between Afghanistan and Pakistan.

Launching a bus service between Jalalabad and Peshawar, increasing flights between the two countries, free access of Afghans to ports, unrestricted movement of cargo trucks, easing movements of passengers, Pakistan’s scholarships for Afghans and its assistance to Afghanistan in the health sector were the subjects which officials of the two countries talked about.

Interaction of other countries with Afghanistan

US officials say they are working with China and Russia to ensure stability in Afghanistan. Russia has welcomed the remarks.

Germany has said it is taking steps to make relations with Afghanistan’s caretaker government and provide humanitarian assistance to Afghans. It said that its ambassador will also travel to Kabul next week to strengthen ties with the new Afghan administration.

Wang Yu, China’s ambassador to Afghanistan,said he would provide necessary visa facilitation to Afghan businessmen in an effort to boost political and trade ties between the two countries.

Iran has announced that its special envoy to Afghanistan, Hassan KazemiQami, will visit Kabul soon.

Iran has called on the international community to prevent Afghanistan migration crisis andprovide assistance to the war-torn country as well as unfreeze the assets of Afghan people.

The US froze nearly 10 billion US dollars of Afghanistan assets in its banks, after the Taliban captured Kabul, causing serious economic problems for the Afghan people.