KABUL (Pajhwok): Nineteen people were killed and injured in Afghanistan last week, US President Joe Biden’s executive order on Afghanistan’s assets drew strong reactions and the UN hoped that it would collect $4.4 billion in aid for Afghanistan during a meeting in March.

At least 15 people were killed and four others injured in Afghanistan last week, none of these casualties caused by natural disaster.

According to reports, three members of Eng. Mohammad Khan, deputy head of Hizb-e-Islami Afghanistan led by Abdul HadiArghandiwal, were killed last week inside his house.

Khan claimed the attack in which his family members were killed was staged from outside but government officials stressed the armed attack was generated from inside the house.

In Kabul’s 15th Police District, two robbers were killed and a third injured during a firefight with security forces last week.

In Jalalabad, the capital of eastern Nangarhar province, unknown gunmen killed a money changer while two people were injured in rocket attack by Pakistani forces in the Marawara district of Kunar province last week.

Five people, including two security personnel, were killed while a third injured in an armed attack on Habib Afghan, a former Wolesi Jirga member, in MahmoodRaqi, the capital of central Kapesa province.

In Baghlan’sDeh Salah district unknown gunmen killed a medical doctor and a child was killed by war remnants in Tirinkot, the capital of central Uruzgan province.

Last week, the body of a woman was found in Kandahar City while a man killed his wife in Qala-i-Naw, the capital of northwestern Badghis province. 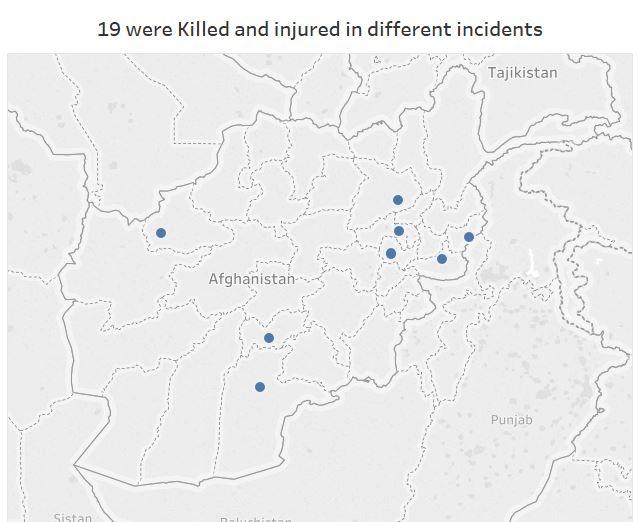 According to reports, 12 people were killed and 18 others injured in the country in the previous week.

This comes as before the regime change on August 15 last year, hundreds of people were killed and injured nationwide weekly.

Biden on February 11 signed an Executive Order allowing some of the frozen assets from the country’s central bank, the Da Afghanistan Bank (DAB), to be distributed as assistance to families of the victims of September 11, 2001 terror attacks.

According to the White House, while “the administration will seek to facilitate access to $3.5 billion of those assets for the benefit of the Afghan people”, “more than $3.5 billion in DAB assets would remain in the US and are subject to ongoing litigation by American victims of terrorism”.

Biden’s executive order was faced with reactions from inside and outside the country.

DAB termed US president’s decision unjust and unacceptable and said it will never accept this decision.

Afghanistan’s acting government officials warned of policy change towards the US if the country did not reverse its decision regarding Afghanistan’s assets.

Afghanistan Commerce and Investment Chamber said Afghanistan’s frozen reserves should not be used for disbursement outside Afghanistan and said $2 billion in those reserves belonged to private sector in Afghanistan.

Former President Hamid Karzai while showing his reaction said Afghanistan’s reserves belong to the people of Afghanistan and it should be given to Afghanistan.

Afghanistan’s Former National Security Advisor also condemned the US president executive order and said “I feel guilty before my people and before the history of my country to have ever considered the US government as a friend and ally. May the Afghan people forgive me.”

Common people, business persons and money changers in different provinces through rallies denounced US decision regarding Afghanistan’s reserves and some women activists through open letter to President Biden termed his decision as painful.

They said perpetrators of 9/11 attacks were not Afghans, Afghanistan’s reserves belonged to the people of Afghanistan and US should reconsider this decision.

The Amal WalasiTolana — National Action Association — also contradicted the recent US decision and stressed all frozen funds of Afghanistan should be released.

In reaction to Joe Biden’s order about Afghanistan’s assets, China said that the world’s wealthiest country was stealing from the world’s poorest country. It said that US made whatever excuses, the assets belonged to Afghans.

Foreign Canadian envoy to Afghanistan, Chris Alexander, said that the frozen money of Afghanistan in the US belonged to Afghans and Pakistan should compensate for the victims of 9/11 attacks.

On the other hand, US Charge De Affaire Ross Wilson said that statements of the US President Joe Biden have misinterpreted in media and a part of the fund would probably be given to Da Afghanistan Bank.

Members of Gulf Cooperation Council have asked the international community to provide development assistance to Afghanistan in addition to humanitarian aid, as well as to improve the country’s economic situation. International Union of Islamic Scholars praised domestic and foreign policy of Afghanistan and termed them as according to Islamic rules.

The United Nations Assistance Mission in Afghanistan (UNAMA) says it is talking with various parties in Afghanistan to bring economic stability to the country that could benefit all Afghans.

Interaction with and recognition of caretaker government

Pakistani Prime Minister Imran Khan in an interview with CNN said that Afghanistan’s caretaker government will be recognized by the international community, something he added would bring stability to the war-torn country.

On the other hand, US special envoy to Afghanistan, Thomas West, said that the US was talking honestly with the Taliban and they would not recognize the new Afghan administration until it changes its attitude.

He also said that the US did not support any resistance group against the Taliban and called on other countries in the region to take a similar stance.

Meanwhile, the US has asked officials at the Afghan embassy in Washington to close the embassy.

An important official of former government returns to Kabul

Salam Rahimi, the former State Minister for Peace Affairs, returned to Kabul and met with officials from the caretaker government.

Acting Foreign Minister Mulavi Amir Khan Mottaqi welcomed Rahimi to the country and assured him of a dignified life in his homeland.

During the meeting, Rahimi expressed happiness over his arrival in Afghanistan and praised the positive changes made by the new government.

Concerned about the existence of ISIS

Commander of the US Central Command, Kenneth Frank McKenzie, has expressed concern about the presence of ISIS or Daesh in Afghanistan, saying that the latest investigations by the US Department of Defense show that the militants are still present in Afghanistan.

However, the Afghan Ministry of Defense denied the claims, saying that Afghanistan is not a safe haven for terrorists.