During the past week, the US eased restrictions on doing business with Afghanistan and China and Germany announced convening international summits on Afghanistan to cope with humanitarian crisis in the war-torn country.

At least nine people were killed and 24 others injured in separate incidents of violence during the past week.

A 10-year-old boy was killed in a roadside bombing in Shah Walikot district of southern Kandahar province. The dead body of a young man was fished out from a river in Kama district of Nangarhar province. Signs of torture were visible on the body.

Also in the Abkamara district of Badghis, a boy reportedly fired a pistol after a verbal dispute with his father, killing his wife.

Unknown motorcyclists shot dead a public representative on his way home from a mosque after evening prayers in Maimana city of Faryab province.

Security officials opened fire at a vehicle as part of a wedding procession in Shegal district of eastern Kunar province, killing one person and injuring another. 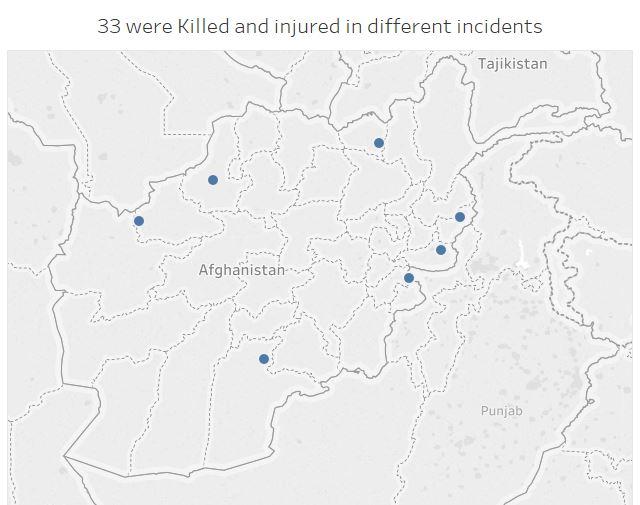 In the previous week, according to reports, 30 people had been killed and 42 others wounded.

In the past conflict, hundreds of people would die and wounded during a week.

Families of the 9/11 victims, China, Iran, Pakistan and Uzbekistan demanded the release of the frozen Afghanistan money and the caretaker government of Afghanistan urged the world community to lift economic sanctions on Afghanistan.

Russia’s ambassador to the UN, Vasily Nebenzya, said the United States only destroyed Afghanistan during the past 20 years and the international community and went left the war-torn country alone when it needed help.

But there were reports last week that the US Treasury Department issued a license to facilitate trade and financial transactions in Afghanistan, allowing Afghan private banks to continue operating with international banks as before.

The Central Bank of Afghanistan has welcomed the move.

Last week, US relaxed sanctions on Afghanistan’s financial system but Washington’s Special Envoy for Afghanistan Thomas West said they were not prepared to recognize the current acting government in Kabul.

Iran said it will recognize Afghanistan government if it is inclusive.

The World Bank said the announced aid money will be channeled through UN related agencies and NGOs.

India announced 50,000 tonnes of wheat assistance with Afghanistan, the first shipment — 2,500 tonnes — has arrived in Afghanistan.

Referring to the situation in Afghanistan, Guterres said he was concerned over deteriorated rights condition of women and girls in Afghanistan after the takeover of new government.

UN Special Envoy on Afghan Women and Girls Rights ReenaAmeerisaid it was necessary and women’s and girls’ abilities and talent should be used for better future and stability of Afghanistan.

This comes as Afghanistan acting government often pledged its commitment to women rights under Sharia Law.

According to reports, China will organize meeting of Afghanistan’s neighbours later in March or possibly on March 30.

Germany also announced to co-host a meeting on Afghanistan alongside the United Kingdom on humanitarian situation in Afghanistan.