KABUL (Pajhwok): At least 28 people were killed and injured in Afghanistan last week, while UNSC extended UNAMA’s mission in Afghanistan for another year, saying the organization is working to gain international status for Kabul.

At 21 people were killed and seven others were injured in Afghanistan last week. The death toll does not include casualties caused by natural disasters.

According to reports, a civilian was shot dead by security personnel in Chamkani district of Paktia province, while unidentified gunmen killed a police commander and a soldier of previous administration in Khas Uruzgan district of Uruzgan province. A security officer of Shahrak district of Ghor province was killed by another security officer.

A bomb blast in Shawalikot district of Kandahar province killed four children while a person was injured another blast in Ferozkoh, the capital of Ghor province. 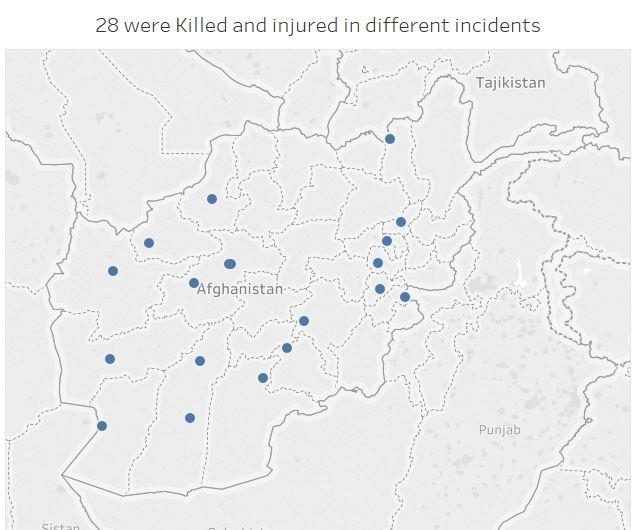 The week before last,18 people were killed and 17 others were injured in Afghanistan.

Decline in casualties comes at a time when last year before political change in the country hundreds of people would get killed and injured due to the war.

Last week, all members of the UN Security Council, except Russia, voted in favor of extending UNAMA’s mission in Afghanistan for another year.

A UN resolution also called for delivery of aid, formation of an inclusive government and long-term peace and stability in Afghanistan.

The Afghan caretaker government and the US Charge d’Affaires for Afghanistan have welcomed the extension of UNAMA’s mission in the country.

United Nations High Commissioner for Refugees (UNHCR) saysthat UN wantsAfghanistan to have an international prestige and that the organization continues its efforts on the regard. UN Secretary General’s special represetnative says that many countries are interested in cooperation with the Afghan caretaker government.

However, Afghan embassy and consulate have been closed in the US due to lack of funding and non-recognition of the Afghan caretaker government.

Acting Afghan foreign minister, Amir Khan Muttaqi said that Kabul has contact with many embassies of Afghanistan and urged opposition politicians to end their opposition.

Last week, the Afghan cabinet approved the formation of a commission to establish contact with Afghan personalities living abroad and to encourage them to return home.

Former President Hamid Karzai welcomed the formation of the commission, calling it a step towards lasting peace and stability in the country.

EU envoy to Afghanistan also welcomed the establishment of the commission, saying it would be a step forward for the Afghan government in gaining legitimacy.

Former Afghan Foreign Minister HanifAtmar has asked the Afghan caretaker government to share the authority of the commission with common Afghans.

UNICEF in Afghanistan said that Japan has provided $3 million in aid to Afghanistan for the organization while$23 million delivered to the Afghan central bankin humanitarian aid last week.

Malaysia also promised to donate 1.6 million doses of the coronavirus vaccine to Afghanistan while UNFPA expressed concern over increasing humanitarian crisis in Afghanistan and says that they have plan to deliver humanitarian aid to 9.28 million people in the war-torn country.

United Nations Office for the Coordination of Humanitarian Affairs (UNOCHA) says that the United Kingdom, Germany and Qatar will hold an international conference on raising humanitarian aid to Afghanistan in the next two weeks.

A senior UN official has called the economic situation in Afghanistan as worrying and called on the international community to take concrete steps to provide humanitarian assistance to the country.

Foreign Ministers of Afghanistan and Turkey last week discussed Afghanistan’s international airports, including Kabul International Airport and alsotalked about contents of an agreement on the regard.

The 48th OIC foreign ministers conference is scheduled to be held this week in the Pakistani capital, Islamabad, to discuss the situation in Afghanistan and some other important issues.