KABUL (Pajhwok): Twenty-six people were killed and 16 others injured in Afghanistan last week when some sources claimed extra judicial killings in some areas, but the government strongly rejected these claims.

At least 26 people were killed and 16 others injured in Afghanistan last week. Casualties from natural disasters are not included in these figures.

According to reports, two people were killed and seven others injured as a result of a violent clash between common people in southern Helmand province.

In Sar-i-Pul province, a man killed his brother’s wife; in Farah province unknown gunmen shot dead one person and injured another.

A man was injured as a result of an old warhead blast while one man was killed due to personal enmity in central Maidan Wardak province.

According to reports, a man stabbed his four children and wife and injured them while one person was killed and two others injured as a result of a violent clash between two families in Nangarhar province.

Unknown gunmen killed a man in Uruzgan province while four people were wounded during a clash between two families.

Last week a shepherd was killed in Khost province, one person was killed another injured due to aerial firing in Paktika province while one person committed suicide.

According to local sources, a farmer was killed in Daikundi while a girl was also killed by an individual.

Three people were wounded in a blast inside a mosque in capital Kabul, according to reports. 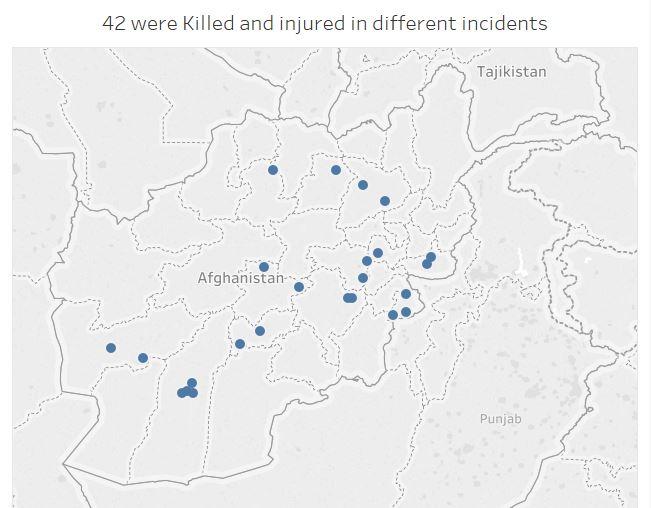 The previous week at least eight people were killed and six others injured in Afghanistan.

This comes as before the regime change last year, hundreds of people would get killed and injured every week.

Claims of clashes and casualties in some areas

According to reports, clashes occurred between caretaker government forces and armed opposition in some areas of Panjshir and Baghlan proivnces.

The reports say that the armed opposition in Panjshir, without giving any details, claimed that the caretaker government forces had recently arrested a number of civilians in the province and killed some of them.

EU Special Representative for Afghanistan Von Brandt called the reports of civilian casualties in Panjshir “worrying”, but the government denied the reports as baseless.

Dr. Abdullah Abdullah, an official of the former government, in a tweet said, ““Lately we received news regarding tragic and painful incidents based on credible reports that military personnel have started the extra-judicial killing, torture and Kangaroo Courts trial of innocent people in Panjsher, Takhar, Andarab and Khost. Such acts are against religious teachings, human rights, war laws and condemnable through international norms and regulations.”

However, Zabihullah Mujahid, a spokesman of the government, said, “First of all, this claim is based on rumors and propaganda which have been misreported in some social media channels as if there is a problem in some provinces, but no such incidents have happened, we agree that clearing operations are conducted in two valleys of Panjshir and some parts of Baghlan due to presence of illegal armed men in the areas, but no one was killed and neither was there a clash…”

EU envoy to Afghanistan, Tomas Niklasson last week saidthat EU would never support the insurgency in Afghanistan, and acting interior minister, SirajuddinHaqqani said the channel for talks was always open for the opposition.

The Afghan caretaker government announced an ‘explanatory and practical’ plan for Sharia hijab on May 7.

Based on the hijab design of the caretaker government, every garment used for covering the body is hijab but the garment should not be thin and fit to reveal body parts.

The decree on the regard said that the chador, which has been a part of Afghan culture for centuries, is the best form of sharia hijab.

The decree stated, “If a woman ignores hijab, her house should be identified as the first response to the violation, then her family should be advised, if the violation repeated, the family members of the woman should be called to the concerned organ and imprisoned for three days, and in of repetition of the case, the family member (husband, father, brother) should be taken to justice for punishment.”

The United Nations Assistance Mission in Afghanistan (UNAMA) has called the new caretaker government’s hijab rule as a violation of its commitment to the international community.

UN Secretary-General Antonio Guterresin a tweet said that Afghan government’s announcement that women should cover their faces in public places and leaving home only when needed has made them anxious.

A number of member states of UN Security Council in a special meeting expressed concern over human rights and newly imposed ‘restrictions’ on women. While Norwegian envoy to UN, said that the Afghan government’s approach was to impose restrictions on girls and women rather than solve economic problems.

G7 states including the United States, France, Canada, Germany, Italy, Japan and the United Kingdom, said in a statement on the situation of women in Afghanistan that they oppose “restrictions” on women and girls.

In response to the new hijab rule, some women in Shahr-e-Naw area of ​​Kabul protested against the government’s decree, saying that the chador was not their hijab.

However, a number of other Afghan women and girls have said in reaction to the announcement of the new hijab design that they not only have no problem with the hijab, but also consider it the beauty of Muslim women. However,they said that they want the government not to stop women’s work and education.

Former Afghan President Hamid Karzai has said that Afghans are religious people and have always adhered to the hijab as it is their culture.

ZabihullahMujahid, Islamic Emirate spokesman, said at the announcement of the hijab decree that the decree would be implemented carefully and no one would be threatened in this regard.

Vice and virtue minister in a meeting with the EU Special Representative for Afghanistan and Pakistan said that the ministry was set up to reform the system and society. “As hijab is banned in non-Islamic countries, contrary, it is a rule of Islam and Afghanistan is an Islamic country that is the reason we issued the hijab decree.”

Last week, $64 million in humanitarian aid arrived in Afghanistan. According to reports, the level of the assistance from the international community has reached more than $824 million since regime change in August last year.

The US special envoy to Afghanistan, Thomas West, said that they are working to stabilize Afghanistan’s economic system and they have provided assistance on the regard.

If threatened with terrorism from Afghanistan, we will respond with attack: US

US Army Joint Chief of Staff Mark Milley has said that if they see a “terrorist threat” from Afghanistan, they will again launch a military operation there.

This comes as Afghan officials have previously said that they are living up to their promises and that no one will be threatened from the soil of Afghanistan.