KABUL (Pajhwok): At least 23 people were killed and 34 others were injured in Afghanistan last week, when the United Nations expressed concern over the humanitarian situation in the country and called interaction with the caretaker government the only way forward.

At least 23 people were killed and 34 others wounded in separate incidents of violence across the country last week.

A bomb blast killed two civilians and injured 28 others, including five security personnel, in the bazaar of Shinwari district of eastern Nangarhar province, local sources said.

Five people, including three assailants, were killed and seven others were injured in an attack on a Sikh temple in the Karta-i-Parwan area of ​​Kabul last week.  Daesh or ISIS has claimed responsibility for the attack.

One person each was killed by unknown individuals in Jawzjan, Kapisa and Faryab, while the bodies of two girls turned up in Herat and Bamyan provinces, officials said. 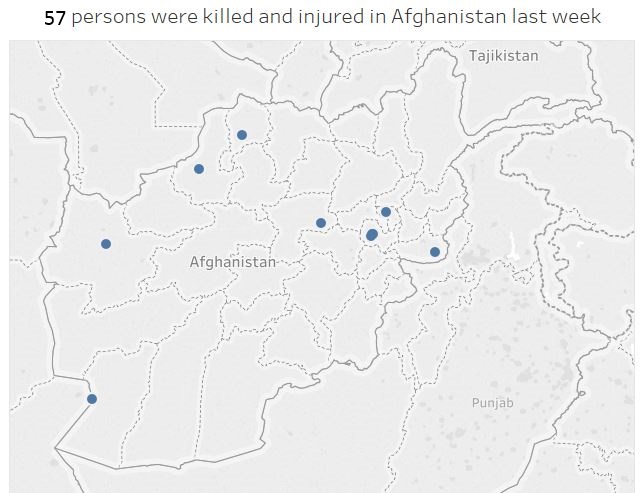 According to Pajhwok weekly reports, 26 people were killed and 35 others were injured in Afghanistan the previous week.

Hundreds of people would get killed and injured during the past conflict that ended on August 15 when the Taliban seized power.

A kind of interaction exists between the Afghan caretaker government and the world, though no country has yet recognized the Taliban’s government.

Last week, India sent a technical team and stationed it at the embassy in Kabul to coordinate and monitor India’s continued involvement and effective humanitarian assistance to the people of Afghanistan.

The Indian move was praised by Afghan officials who assured all embassies in Kabul that their safety and security would be taken seriously in accordance with international diplomatic principles.

Last week, Uzbekistan National Security Council Adviser Abdulaziz Kamilov said during a meeting with Afghan Deputy Prime Minister for Economic Affairs Mullah Abdul Ghani Baradar that an international conference on Afghanistan would be held in Tashkent next month and senior representatives of the caretaker Afghan government would be invited to attend the event.

Afghan deputy foreign minister Mohammad Abbas Stanekzai said Afghanistan desired positive relations with its neighbors and countries in the region and that neighbors should not create problems for Afghans at the borders.

The Ministry of Foreign Affairs said scholars from Afghanistan and other countries had called on the Islamic world to support the current Afghan system and deepen cooperation and ties with it.

The United Nations once again expressed its concern about the humanitarian situation in Afghanistan and the rights of women, girls and human rights. The world body also warned that the poverty rate in Afghanistan could rise to 97 percent by the end of the year.

In his report to the UN Security Council, Ramiz Alakbarov, officer-in-charge of UNAMA, described the country’s urgent needs, such as Wednesday earthquake in southeastern Afghanistan and sought more humanitarian aid for the country.

He listed the deteriorating human rights situation, economic crisis, the ongoing humanitarian crisis and the need for continued interaction with the Taliban authorities as priorities. He called the current humanitarian situation in Afghanistan a matter of concern.

However, officials in the caretaker government say Afghanistan has a responsible system, a judiciary and rights for all, including women, within the framework of Sharia law.

They blamed the economic problems on the freezing of Afghan capital by the United States and imposition of restrictions on Afghanistan’s banking system and other sectors, but added efforts were underway to resolve them.

UK: We do not support political change in Afghanistan through violence

Last week, Hugo Shorter, Charge d’Affaires of the UK mission in Doha, said in Qatar that the kingdom would not support anyone, including Afghans, to bring about political change in Afghanistan through violence.

The day after Mr Shorter made the statement, five British citizens who had been held captive for more than six months by the Islamic Emirate were released. They included Peter Jouvenal, a well-known businessman and former journalist

Deputy Foreign Ministry Spokesman Zia Ahmad Takal welcomed the UK’s stance, saying: “It is important to understand this fact. Peace and stability in Afghanistan and positive interaction with the Islamic Emirate are in the interest of the region and the world.”

Last week, Assadullah Haroon, an Afghan detainee at Guantanamo Bay, was released after spending 15 years in prison without trial. He arrived in Kabul yesterday.

According to Afghan officials, Haroon was released from Guantanamo Bay as a result of the efforts of the caretaker Afghan government and a positive interaction with the United States.

Hundreds of people had previously been held at Guantanamo Bay, but now only one Afghan remains, according to reports.

A magnitude 6.1 earthquake jolted parts of Afghanistan on Wednesday night, but in Paktika and Khost provinces, it killed at least 1,000 people, injured 1500 and destroyed 3000 homes.

Iran, Pakistan, India, Uzbekistan, Saudi Arabia, Qatar, Turkey and some other countries and organizations have also provided assistance to the quake victims.

Last week, some members of the previous Wolesi Jirga said efforts were being made to convene online sessions of the lower house.

However, some former lawmakers and political experts called the move useless and the caretaker government said it worth no response.