KABUL (Pajhwok): Talks between Kabul and Washington in Qatar and calls for compensating Afghanistan for the damage caused to it by the years of occupation and formation of a global group to resolve problems in the war-torn country were major events last week.

At least 16 people were killed and 15 others were injured in various incidents of violence across the country last week.

A blast in Kabul city injured at least three people and security forces gunned down an ‘armed robber’. An eyewitness said five people were injured in the explosion, but two of them were not taken to hospital for being injured slightly.

Unidentified gunmen killed the economy department director of Faryab province and killed one person each in Paktika, Ghor, Sari Pul and Badghis provinces, according to reports.

Eight nomads were injured when security forces opened fire at them following a physical clash over a land dispute in Ghazni province.

The casualties are based on reports reaching Pajhwok and some incidents may have gone unreported or the sources provided no exact figures. 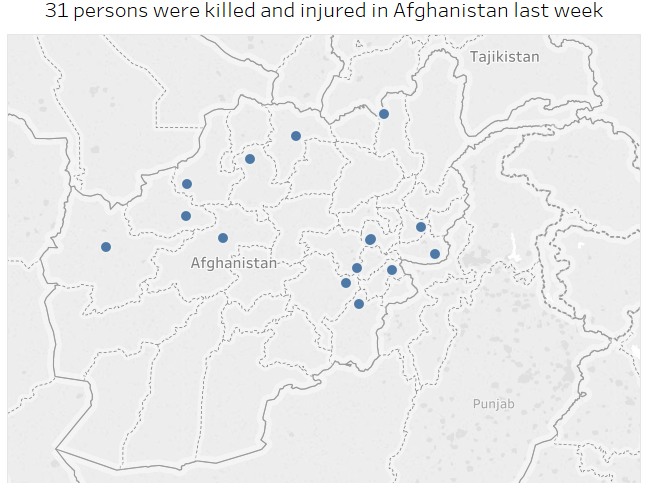 In the previous week, 23 people were killed and 29 others were injured in various incidents of violence across the country.

In the past before August 15, 2021, hundreds of civilians and people associated with parties to the conflict would get killed and injured every week.

The 6th Conference on Interaction and Confidence Building Measures in Asia (CICA) summit was held in Astana on Thursday.

Leaders and representatives of about 40 countries, including Russia, Uzbekistan, Iran and Pakistan, participated in the event.  Participants of the meeting called for formation of an inclusive government and stability in Afghanistan.

Russian President Vladimir Putin said Afghanistan’s illegally blocked funds must be unfrozen and the country should receive compensation for the damage caused to it by the years of occupation.

“We call for compensating the damage inflicted on Afghans over the years of occupation and unfreezing illegally blocked Afghan funds”.

Uzbekistan president Shavkat Mirziyoyev suggested a global group should be formed to solve the problem of Afghanistan.

Iranian President Ibrahim Raisi again called for the establishment of a broad-based government in Afghanistan, representing all ethnic groups.

Pakistan Prime Minister Shehbaz Sharif called a peaceful, stable and developed Afghanistan in the interest of the region and the world.

Bilal Karimi, deputy spokesman of the caretaker government, said they considered as good all meetings discussing Afghanistan and benefitting the Afghans.

CICA was accepted as an intergovernmental forum at the request of then President of Kazakhstan, Nursultan Nazarbayev, in the 47th General Assembly of the United Nations in 1992.

Afghanistan, Pakistan, India, China, Iran, Russia and 27 Asian countries including Turkey are members of the forum which meets after every four years.

Last week a two-day meeting of NATO defense ministers was held in Brussels, with Ukraine topping the agenda. Afghanistan was not discussed in the meeting.

Meeting of Afghan and American officials in Doha

A high-level meeting between officials of the United States and the caretaker government of Afghanistan took place in Doha last week.

CIA deputy director David Cohen and Afghanistan director of intelligence Abdul Haq Wasiq attended the meeting that talked about the fight against terrorism.

The purpose of the talks was to remove suspicion and to find a way to solve controversial points through direct talks instead of trading blames.

US new curbs in response to girls’ education

Last week, US Secretary of State Antony Blinken tweeted on the International Day of the Girl Child that the United States had imposed visa restrictions against Taliban officials and other individuals ‘responsible for repressing Afghan women and girls’, hoping to persuade the regime to reconsider its repressive policies.

“Today I am announcing a visa restriction policy … to restrict the issuance of visas for current or former Taliban members, members of non-state security groups, and other individuals believed to be responsible for, or complicit in, repressing women and girls in Afghanistan through restrictive policies and violence.”

Secretary Blinken also called on other governments to “join us in taking similar actions and to continue to underscore a collective message that only a government in Afghanistan that represents all its people and protects and promotes the human rights of every individual could be considered legitimate.”

Islamic Emirate spokesman Zabihullah Mujahid said the US was imposing visa restrictions on Taliban leaders to achieve other goals using the pretext of girls education.

In addition, the Afghan Foreign Ministry said the new US visa rules could have a “negative” impact on ties with Afghanistan’s government.

Meanwhile, UN Secretary-General António Guterres once again requested the opening of all girls’ schools in Afghanistan on the occasion of the International Girl Child’s Day.

Heather Barr, interim co-director of the Women’s Rights Division at Human Rights Watch, considered the deprivation of girls from education as harmful for the future of the country.

According to reports, religious scholars and residents of Badghis province also called for the opening of girls’ schools above the sixth grade.

The school year started in March this year and the caretaker government postponed the opening of middle schools and high schools for girls the same day, saying a plan is being devised in this regard, but provided no timeframe.

But a few days ago, Zabiullah Mujahid said efforts were being made to open girls’ schools above the sixth grade and work had been started at a high level to solve this problem.

Last week, EU special envoy for Afghanistan Tomas Niklasson said they preferred interaction with the caretaker government instead of closing the door, but wanted the Taliban to meet certain conditions. He listed inclusive political process, opening of school doors to all girls, responsibility regarding terrorist attacks among the conditions.

In this regard, Mujahid told in a meeting that if the United States desired stability in Afghanistan and the region and wanted its interests served, it should positively interact with the current system of Afghanistan.

Russia has announced granting 500 scholarships to Afghan students. Japan will construct a water canal at a cost of one million dollars in Kot district of Nangarhar province.

According to reports, two packages of 80 million US dollars arrived in Kabul last week as part of international humanitarian aid. The United Nations says it delivered more than one billion dollars in aid to Afghanistan in the past one year to help Afghans.

India also provided medical supplies to Afghanistan and handed over the thirteenth package to Indira Gandhi Children’s Hospital in Kabul.

EU special envoy for Afghanistan Tomas Niklasson said that Afghans needed humanitarian aid, asking Russia, China and member countries of the Organization of Islamic Cooperation to provide humanitarian aid to Afghans like the UK, the US and European countries.

Last week, the White House said although it had ended the longest war in Afghanistan, it would target any ‘terrorist threat’ in the country from over-the-horizon.

This is despite the fact that last week US President Joe Biden signed a bill greatly limiting US drone operations in non-combat areas such as Afghanistan, Yemen and Somalia.

Al Qaeda leader Ayman al-Zawahiri was killed in a US drone strike in Kabul, but the Taliban say it remains a claim and they are investigating in this regard.

Last week, the UN Human Rights Council extended the mandate Special Rapporteur on human rights in Afghanistan Richard Bennett for another year, but Pakistan, China and Venezuela voted against the mve.

Twenty-nine members of the 47-member body voted in favor of extending Bennett’s mission, but Pakistan, China and Venezuela voted against it and 15 members, including Uzbekistan and Qatar abstained.

China argued that the caretaker government of Afghanistan should be allowed to do its work and the opposition of some countries in this country had caused the crisis.

Pakistan said an opportunity to strengthen peace and stability in Afghanistan still existed and added that the extension of Bennett’s mission would not resolve the problems of Afghanistan.