Aurat March was held in different cities of Pakistan to observe International Women’s Day on March 08, 2021 with a view to end to gender-based violence, sexual harassment, rape and female infanticide.

Women from all walks of life had reached at different venues this year.  In Karachi, the march was held at Frere Hall while in Lahore, the protestors had gathered at the Lahore Press Club and marched towards the PIA building in the city. A march was also held in Islamabad, with protestors gathering at the National Press Club from where they went towards the city’s D Chowk.

Continuing with its theme of women empowerment and fighting against the patriarchy, several banners and placards went viral on social media highlighting the Aurat March. The most used hashtag was #AuratMarch2021, #AuratAzadiMarch2021, #MeraJismMeriMar 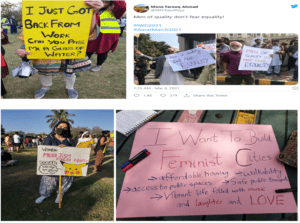 However, Mullahs, a few journalists, Twitter users and clever politicians always try to foil the spirit of the women of Pakistan who want to get rid of sexual violence and discrimination with them. The radicals try to indicate through social media that these women and their protest demonstration are completely un-Islamic and against the tenets of Islam.

Women’s rights have been on the social agenda in Pakistan for years, but the media largely ignored it until recently. Followed by Aurat March, a countrywide demonstration on women’s day, a doctored video was spread on social media to ban the Aurat March without fact-checking by journalists and anchors who have millions of followers.

Journalist Ansar Abbasi has posted a series of tweets against slogans and placards at Aurat March 2021. His comments emerged shortly after a disinformation campaign was carried out against the Aurat March organizers on Twitter.

Here are his tweets:

Their irresponsible actions have unleashed dangerous threats, including death threats, against organizers and participants of the March on social media. The most used hashtag was #BanAuratMarch and #DharnaAgainstAuratMarch. Aurat Marches had received severe criticism and backlash from conservative and religious circles. Male celebrities and politicians publicly abused activists while criticizing slogans on national television. Feminism, in their opinion, endangers Pakistani society and culture. The majority of conservative, religious segments have declared the problems highlighted by marchers as “non- issues” and rejected them as ploys to “westernize” society. They assert that feminist women should talk about “real” issues, such as the worsening economic situation of the country, instead of holding “obscene and vulgar” posters. Islam, according to them, has given all rights to women. This backlash against Aurat March and feminist activists raises concerns about the situation and the status of women in Pakistan. 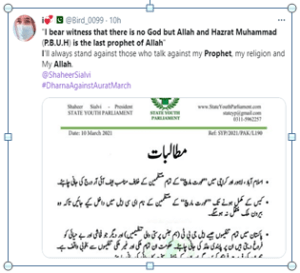 After it was found that the video and posts criticizing the AuratMarch found to be fake, many people started trending #ApologizeToAuratMarch.

Special Assistant to Chief Minister on Information Dr Firdous Ashiq Awan said she would continue standing with women for their cause but the slogans promoted by some organizations working for women were against the values of this society. This shows Federal Government of Pakistan feels uncomfortable to such strong protests by women which was viewed worldwide through social media and electronic media.

Aurat March was marked by a feeling of apprehension and fear due to the extreme backlash emanating from religious and conservative circles. Stringent security measures and police presence painted a risky picture of the peaceful march for basic human rights. Religious parties announced a counter “Chastity Rally” on March 8th in the capital city, Islamabad. This atmosphere of fear and violence to suppress the voices of repressed minorities is an alarming prospect.

In the 80s, military dictator General Zia suspended all fundamental human rights guaranteed in the Constitution of Pakistan. He introduced a series of repressive laws to tarnish women’s status, eliminate and restrict their personal liberty, visibility, and participation in public life. The Qanun-e-Shahadat Order damaged the status of women by making the testimony of a woman equal to only half the weights of a man. The Hudood Ordinances eliminated the difference between rape and adultery and made sexual relation between unmarried couple a crime. This law treated any report of rape as a confession of adultery by the victim and held them accountable. It also dictated women’s clothing, perpetuated domestic violence, and reduced the role of a woman to a slave who cooks, cleans, and produces a male heir. This period of Pakistan’s turbulent history was characterized by public floggings of women and police brutality against activists.

The status and situation of women in Pakistan varies according to the socio-economic class that they come from and the region they live in. A minority of upper middle-class urban women have access to higher education and pursue careers that can move beyond traditional roles. But the reality for the majority of working-class women in rural areas is different due to poverty, violence, traditional gender roles that are enforced on them, and the lack of access to education. According to a Thomson Reuters Foundation’s poll conducted in 2018, Pakistan remained the world’s sixth most dangerous country for women due to regressive cultural traditions, sexual violence, domestic servitude, discrimination based on property and inheritance rights, access to education, and nutrition. The maternal mortality rate in Pakistan is among the worst in the world and life expectancy for women is lower than that for men.

The demands – and perhaps the very existence – of the Aurat March are denunciation to existing patriarchal structures. The so-called “indecent and immoral” placards represent a grim reality for the majority of women in Pakistan. Critics can neither stop the marchers nor the movement. We will continue to march with tremendous energy, courage, and passion into an unknown but exciting future. Aurat March brought about mainstream public discourse regarding feminism, and for that, it was a resounding victory even before it happened.

The views expressed in this article do not necessarily reflect Pajhwok's editorial policy.