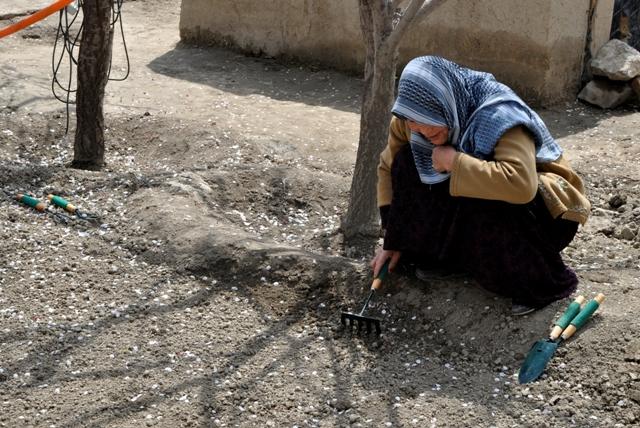 KABUL): “I cover most of my family expenses with the blisters of my hands,” are the poetic words that 55-year-old Fatima employs to describe her source of income.

She is no ordinary, conservative Afghan housewife, but an enterprising woman farmer from the Mirshkar village of Chahar Asiab district of capital Kabul.

“I cultivate pepper, tomatoe, radish and lettuce in our yard and that is a good source of income for our family” says Fatima, donning a black scarf.

“My husband is 65 (years-old), he cannot work enough and sometimes carries vegetables on his handcart from one shop to another shop. He earns 50 afs and sometimes 60 afs daily,” adds Fatima, toiling on her one-acre farmland.

It is a gripping tale of an economically hard-pressed woman, who ekes out a living in the largely male-dominated agrarian society.

“If I had access to more land, then I could work on it because I want to stand on my own feet,” says the mother of five daughters and three sons.

Thanks to the Afghanistan in 2004, to support farmers in the country. Certainly, budding growers like Fatima have benefitted from such training.

Knowing how to irrigate her farms, Fatima obtains high quality seeds free of charge from the agriculture cooperative in her village.

Fatima’s career is not an isolated success story from far-flung fields of the impoverished country.

According to Abdul Jalil Walaspal Agriculture Ministry’s press official, 85 percent of Afghans rely on agriculture for survival. Amazingly, 50,000 of them are females!

Shapari is another woman farmer from the vicinity, who has been sweating it out on her farm to support her 12-member family, for the last two years.

A widow, Shapari, shovels, irrigates and plants seedlings all by herself, after her husband’s death. She has to finance her children’s studies.

Tahira Sakhizada, director of the women cooperative in the area, said her organisation began supporting female farmers since the past two years. Currently, there are 150 women farmers registered with the cooperative.

She explains the cooperative, with support from the agriculture department, provides farm equipment, fertilizers and improved seeds.

Besides, the cooperative also help female farmers sell their crops in the markets. Sakhizada said women used to produce food syrup to earn a living but as farmers they earn better income.

These centers in Kabul, Balkh and Parwan provinces, dedicated to women, distribute agricultural tools and seeds free or at a cheaper price.

She said that more than 34,000 growers, 940 of them women, received training on farming.