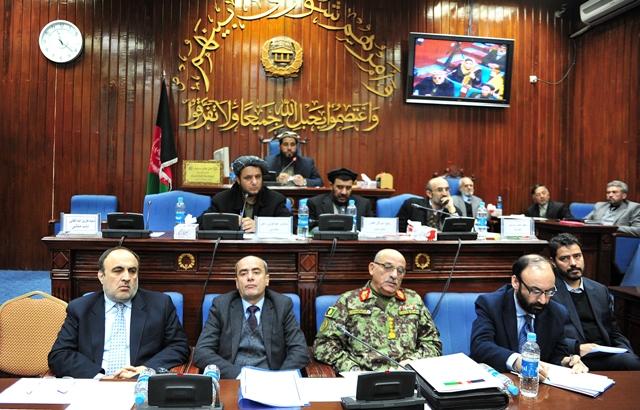 KABUL was informed on Saturday.

Mohammad Kamin, a former police chief of the Baghlan-i-Markazi district in Baghlan province, has been accused of killing three officers of Afghan National Army’s Special Forces. The three were killed a day before Eidul Azha last year. Kamin has since been on the loose.

Also on the run is the district’s former administrative chief, Amir Gul Baghlani, who faces  charges of intimidating the people. The two disappeared after police launched operations in the town to arrest them.

Family members and tribal elders from various provinces last week visited the Meshrano Jirga and lodged their protest with legislators.

All but Patang appear before the house. He sent his deputy Abdul Rahman Rahman, but senators blocked his entry to parliament, accusing Patang of ignoring their decisions.

For his part, Karimi said all relevant government organs had been informed about the assassination of the three army officers the day it happened.

He argued some other departments were also party to the case which was not an internal matter of the army to deal with, insisting the issue pertained to civilians and civil departments could address it.

Zia said the spy service had no information on the whereabouts of the former officials. “At the moment, we don’t have any clue that can lead us to the duo, but I promise if we get something, it would surely be shared with relevant organs,” the intelligence official said.

While IDLG chief Farahi said his department followed aspects of the case that fell within its jurisdiction.

However, a lawmaker from southern Zabul province, Mohammad Daud Hassas, claimed the two had taken refuge in a rest house at the Presidential Palace.

Farahi said the Baghlan incident took place a day before Eidul Adha when the three ANA officers had gone to Baghlan-i-Markazi town for Eid shopping.

The officers had caught some armed individuals on their way back and disarmed them, Farahi recalled, adding one of the armed men was loyal to Kamin. The detainee phoned the former district police chief about his arrest by the army officers.

Kamin then received orders from the town’s then administrative chief, Amir Gul Baghlani, who sought similar disarming of the ANA officers.

As Kamin with his force reached a township in the district, he entered an armed clash with the army officers and killed them, according to Farahi. Nearly a dozen people had been arrested on the suspicion of being involved with Kamin in the gun-battle, he said.