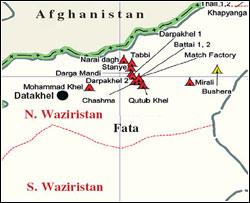 Geo News, monitored here, said the lawmaker phoned Sharif from New Delhi and urged the government to deal with the situation in North Waziristan through dialogue instead of exercising the military option.

Fazlur Rehman said the curfew imposed on the militancy-plagued area be lifted from and the injured people shifted to hospital.

A  day earlier, the army said 33 militants were killed in two days of clashes between security forces and militants in North Waziristan. As many 23 fighters were killed on Wednesday during a clash after an attack on a roadside military checkpoint in Mir Ali.

But locals alleged security forces, after a suicide attack on their checkpoint, started shelling residential areas in Mir Ali. They claimed over 30 people, mostly women, children and elderly people, had been killed.