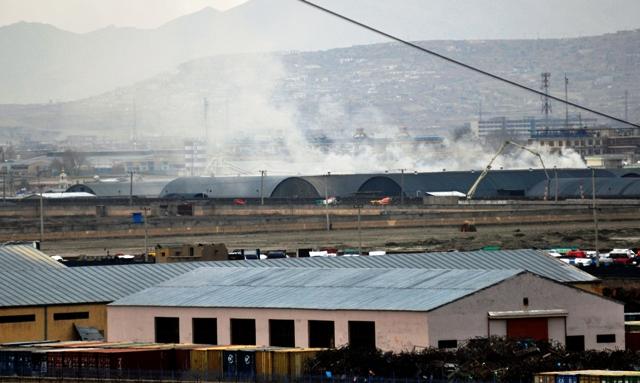 Gen. Ayub Salangi told reporters at the site the burqa-clad assailants fired at the commission’s office from a nearby building and clashed with security personnel for nearly five hours. Two policemen were slightly injured in the gun battle.

Only one rocket was fired at the compound on the Kabul-Jalalabad road by the attackers, who mostly used light weapons, according to the deputy minister. He said the incident was under investigation.

But witnesses claimed at least 15 rockets were fired in addition to a volley of gunfire. Some of the rockets hit the IEC compound, they said.

Maj. Gen. Mohammad Zahir, the Kabul police chief, earlier told Pajhwok Afghan News the insurgents forced their way into the building in front of the IEC office in the ninth police district at around 12:30pm.

Noor Mohammad Noor, the commission’s spokesman, told Pajhwok Afghan News that all IEC staffers had been evacuated to safe rooms. He said intense gunfire was traded between the attackers and security forces. Soon afterwards, security forces rushed to the site.

Haji Mohib, who owns the three-storey building, quoted his security guards as saying that the attackers were clad in women‘s clothes. Sensing the danger, the guards ran away.

Mohib added he had asked the police station concerned either to provide security for the building or give his guards arms to defend themselves. However, he alleged, police did not heed his request.

Samiullah, an eyewitness account, said Taliban started firing, followed by two heavy blasts. Gunshots rang out in the area for a long time, according to him. The scene was cordoned off.