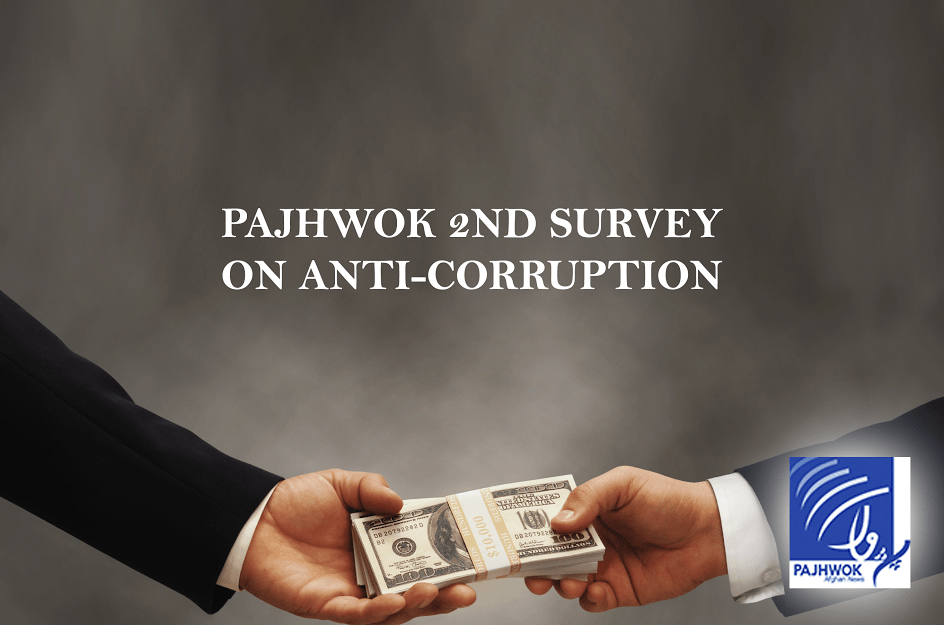 The survey shows 27 percent of Afghans do not believe reporting corruption cases to relevant organs will help them, 23 percent say they inform media outlets and others use alternative sources of highlighting the scourge.

More than 50 percent of people participated in the Internet-based survey, saying media outlets did not focus on covering corruption cases. Less than half of respondents know the sources of reporting the graft issue.

Two in every four people, who participated in the survey, faced problems after refusing to pay bribes, with 25 percent greasing palms of the officials concerned to get their work done.

Majority of the people believed combating corruption was their responsibility and they had acted against it. Fifty percent expressed their willingness to attend anti-corruption protests. Most of the people said they were faced with corruption in judicial organs.

The first survey conducted by Pajhwok Afghan News and European Union (EU), was published on April 12. The second survey by the news agency was conducted online in Pashto, Dari and English. The survey featured 746 people and was visited by 35,350. The participants had the ability to offer their personal views on the subject.

People who filled out the online survey questions were 20 years of age — 72 percent men, six percent women. The rest did not reveal their gender or age.

Most of people complained of blatant graft in courts and other judicial organs and fewer spoke of the problem in the Afghan National Army (ANA). From three to 12 percent of respondents said they had seen corruption in other government departments as well.

Zulaikha, a resident of the Taimani area of the capital, witnessed a corruption case. “My nephew is disabled and his stature is short. Last year, he applied for a passport, but officers concerned did not accept his request. After repeated visits to the department, we finally concluded they seek excuses for bribes. So we paid them and our problem was solved.”

Zulaikha alone was not the only complainant; 48 percent of the people interviewed acknowledged paying bribe in the past few years while 47 percent said they refused to pay.

Rafiullah, a resident of Khairkhana area of Kabul, also paid a bribe for getting his passport and marriage certificate (nikahnama).

Mariam, a dweller of Maidan Wardak province, said that she paid 20,000 afghanis to get her passport about four months ago. “I had an urgent piece of work and therefore needed to receive my passport. Otherwise, I would have to wait several days, even months.”

Getting a passport valid for five years involves a fee of 5,000 afghanis. A person could be issued with a passport within five days in Kabul in previous years, but the time was recently increased to about a month.

Bribery in past year

The survey showed 34 percent of people paid bribes, 60 percent did not and the rest would not share their view.

A resident of Faryab province, who wished not to be named, claimed: “You can buy or sell any post here. The Faryab education department is involved in widespread corruption; teacher and district education officer posts carry different price tags — from $1,200 to $5,000. Competitive exams for these posts are just eyewash.”

He charged some posts in the department were up for sale last month when he paid $1,500 for one of the vacancies. But he failed despite receiving 88 marks in the exam. “Later, I understood someone else had paid $3,000 for the same post.”

However, Education Director Ghulam Sakhi Baian spurned the allegation against his department and said the employment process was overseen by a commission with representatives different state organs.

According to the survey, 70 percent of people refused to pay bribes. But 22 percent did not reject bribery demands.

Mohammad Nasir Mowahadi, writer and presenter of Saba Television, said: “I was asked to pay a bribe by an official at the education department in Maidan Wardak province in 1388.” Without providing details, he said his problem was not resolved as a result of his refusal.

“I decided to report the issue to the organs concerned, but I did not do so because I felt I would face more problems,” he continued.

A majority of respondents said they faced problems after refusing to pay bribes. The problems of 18 percent of the respondents were resolved after they paid bribes.

Shahid Zalmai said he had not faced any problems after refusing to pay bribes. “I was asked to pay 500 afghanis for the early issuance of my passport, but I refused and waited until I received it legally.” He asked the masses not to pay illegal gratification.

Most of people said they did effuse to pay bribes because their problems would not be addressed, or delayed. With this in mind, many felt obliged to meet unlawful demands from the authorities concerned.

Abdul Latif, a resident of the Bagrami area of Kabul, alleged he was asked four months ago to pay a bribe for his identity card. He paid 500 afghanis and got his card. “I visited the census office several times, but faced problems as long as I didn’t pay backhander.”

Most of those who filled out the questionnaire online said the general public was also responsible for banishing the bane. However, some people said it was the responsibility of the government to curb corruption.

Wakil Safi said it was the responsibility of every Afghan to stand against corruption.

“Corruption in Afghanistan has reached peak; it is the duty of all Afghans to curb it. I am a teacher. My students and colleagues would not accept corruption,” said Khalil Seddiqi, another participant.

However, Zakaria Barak said: “People cannot do anything to counter corruption, because corrupt elements are supported by the government.”

Most of those interviewed denounced corruption, saying they would share the glaring issue on social media with the people and inform media outlets and other sources.

But Hamidullah Sohail wrote: “Only public trial and execution of corrupt individuals, irrespective of their ranks or positions, can eliminate corruption form society.”

Niamatullah Zafari, a government employee, agreed corruption within the government had affected citizens and everybody complained of it. He made clear getting rid of the evil was the responsibility of all Afghans. He would be pleased to take part in any anti-corruption protest.

Majority of survey participants said they would be happy to apply for the membership of civil society organisations that worked for the elimination of corruption. But some refused to get the membership of such bodies.

Sosan, coming from Kabul, said administrative corruption had reached its peak in government institutions. A strong civil movement was needed for the elimination of the scourge, she added.

She wished such an organisation was established soon. She would to be the first to seek the membership of such a body, as and when it is set up.

Less than 50 percent of respondents knew whom they should inform of corruption. As many as 37 percent did not know which authority they should approach with corruption cases.

Shabnam, hailing from Kabul, she had not seen corruption with her own eyes. But if she witnesses it, she would contact the police, who have law-enforcement responsibility. In the second step, she would inform the media. According to Shabnam, media outlets can help a lot in the eradication of corruption.

But Maryam, who belongs to Maidan Wardak province, remarked the national unity government had been formed on the basis of corruption and it could not banish the menace. It had failed to measure up to people’s expectations, she alleged.

The survey indicated news organisations were credited, as far as public confidence is concerned. Most people preferred to contact the media but some said they would ask police to curb such cases.

Mohammad Imran, a university student, said: “I will inform media outlets of corruption cases. At least the media can tell the nation their names. This the government can’t do.”

Syed Ahmad, a resident of the Chak district of Maidan Wardak province, said informing the government about corruption was a futile exercise because the graft-tainted individuals were often too powerful to be punished. Ahmad believed media outlets were better than the government in exposing corruption.

Most participants blamed media outlets for giving little attention to corruption. However, some respondent disagreed with the view.

Roohullah Wahabzada wrote media outlets did not pay as much attention to the problem as they should. The media did not discharge its due responsibility in this regard and had to do much more to help curtail corruption, he thought.

“If you watch television, it screens only Indian and Turkish plays, songs, dance and violence-related stories. There is nothing about corruption on the widespread social malaise, claimed Wahabzada.

But Nasrullah, an inhabitant of Khairkhana, said: “I think media is playing its role in spotlighting the issue. Most of administrative corruption cases have been exposed surfaced by the media but, unfortunately, the results have been dismal because government officials themselves are corrupt.”

Pajhwok survey showed most people wanted the corrupt people to be exposed.

Haroon Tahiri, of an NGO worker and resident of Khogyani district of Nangarhar, said it was media’s responsibility to expose the corrupt and report on corruption-related issues.

Some corruption-related reports produced no results just because they were not followed to the end, he explained. The government should punish the corrupt and support media organisations in unearthing the menace, he opined.

Dawa Khan Minapal, deputy presidential spokesman, told Pajhwok Afghan News corruption existed in government organisations. Over the past 14 years, he acknowledged, the culture of graft had become widespread in Afghanistan.

He believed elimination of corruption was a complex and difficult task. But the establishment of an anti-corruption council under the chairmanship of President Ghani proved the government was serious about combating sleaze and venality, he argued.

The council has executive powers and is authorised to deal with corrupt individuals. He said a drive was underway in every government department and recently 600 judges were transferred due to public complaints.

About the government non-serious attitude toward cases of corruption unearthed by the media, Minapal said the incidents might have taken place in the past. President Ashraf Ghani was determined to wipe out corruption, he concluded.