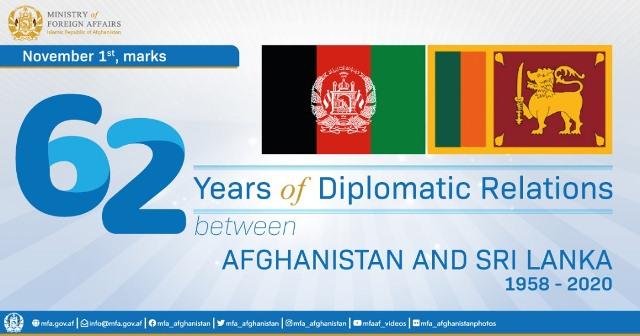 KABUL and Sri Lanka celebrates 62 years of diplomatic relations between the two friendly countries, the Afghan Embassy in Colombo said.

“My Embassy colleagues and I are immensely delighted to join Foreign Minister Mohammed Haneef Atmar in celebrating the 62nd Anniversary of our fast-growing, multifaceted relationship with the friendly Government and people of Sri Lanka,” the Afghan ambassador in Colombo, Ashraf Haideri, said.

Since time immemorial, Afghanistan and Sri Lanka have shared intertwined civilizational ties influenced by such major belief systems as Buddhism, Islam, and Hinduism, which dominated much of the Gandhara region—including modern Afghanistan—from where Buddhism spread to South Asia, Central Asia, and East Asia.

“And history tells us that some of the early settlers of this paradise-island hailed from the northwest of India and the Indus River region, which Afghans then and today have inhabited.”

The envoy said the majestic and revered Buddhas of Bamiyan were a testament to their shared heritage and to Afghanistan’s cultural pluralism and diversity, which underpin the Afghan identity today.

“That is why Afghanistan’s former imperial powers—who later embraced and championed Islam in our flourishing region—revered and protected the Buddhas of Bamiyan, as have the many modern governments of Afghanistan.”

In the modern era, Afghanistan and Sri Lanka established non-resident diplomatic relations on November 1, 1958. “Our missions in New Delhi mostly handled our bilateral affairs, which, except for some intervals during the war years, continued after the fall of the Taliban in 2001.”

In 2013, Afghanistan opened its embassy in Colombo, which Sri Lanka reciprocated in 2014.

As two democracies in South Asia, the fast-growing relations of Afghanistan and Sri Lanka enjoy strong and unreserved support of our two governments’ leadership.

“Shortly after his notable electoral victory last November, President Gotabaya Rajapaksa and I had a very friendly and fruitful meeting, in which we conveyed to him the warm congratulations of President Ashraf Ghani and his firm commitment to further expanding our bilateral relationship, which President Rajapaksa warmly welcomed.”

Haideri said much like Sri Lanka’s valued location as “the Jewel of the Indian Ocean,” Afghanistan is “the Heart of Asia;” the gateway to all Silk Roads in all directions: north and south; east and west.

“We sit right between South Asia and Central Asia, awaiting sustainable peace to be achieved with regional cooperation and support so that Afghanistan can play our natural role as a land-bridge between the subcontinent, South West Asia, and Central Asia.”

The ambassador said given geographic centrality for transit trade, including energy, no major connectivity project could bypass Afghanistan.

“That is why Sri Lanka would greatly benefit from a more beefed-up presence in the country (with a population of over 30 million consumers) where Sri Lankan diplomats could work to help the Sri Lankan private sector take advantage of the numerous investment opportunities in the Afghan virgin markets, while looking northwards to explore similar opportunities in Central Asia (with a population of over 70 million consumers).”

Despite COVID-19 challenge, he said they worked hard over the past few months to facilitate the recent signing of a cooperation Memorandum of Understanding (MOU) between the Afghanistan Chamber of Commerce and Investment (ACCI) and the Ceylon Chamber of Commerce (CCC).

“We did so, knowing the vast trade and investment potential on both sides that need to be realized.”

He said they had no doubt that within a year of such connectivity, they could easily need to operate a daily fight between Kabul and Colombo—carrying tourists seeking rest and recuperation; patients seeking treatment; students seeking quality education; and businesspeople seeking investment opportunities.

Moreover, Sri Lanka’s principal products such as the Ceylon tea; apparel and textiles; spices; food, feed, and beverages; and coconut and coconut-based products could easily find profitable markets in Afghanistan.

“In the same vein, we have encouraged the jewelry sector of Sri Lanka to visit Kabul and see for themselves the endless investment opportunities in this virgin market in Afghanistan as one of the mineraly richest countries in the world with large reserves of precious and semi-precious stones.”

In light of these bilateral trade and investment opportunities, Haideri said they welcomed the recent appointment of a seasoned Sri Lankan public servant, Ambassador-Designate Piyal De Silva, to represent his country in Afghanistan.