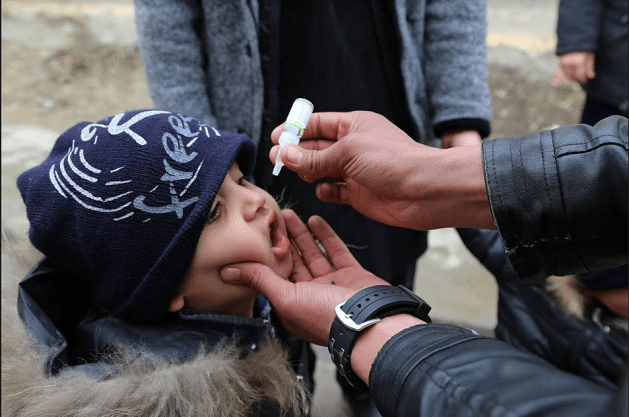 KABUL (Pajhwok): WHO and UNICEF have welcomed the Taliban leadership’s decision on the resumption of a house-to-house polio vaccination drive across Afghanistan.

The vaccination campaign, scheduled to begin on November 8, will be the first in more than three years.

The campaign will cover all children in Afghanistan, including more than 3.3 million who previously missed out on vaccination in certain parts of the country.

A second nationwide polio vaccination campaign has also been agreed and will be synchronised with Pakistan’s drive, planned in December.

“This is an extremely important step in the right direction,” said Dapeng Luo, WHO representative in Afghanistan.

“We know that multiple doses of oral polio vaccine offer the best protection, so we are pleased to see that there is another campaign planned before the end of this year. Sustained access to all children is essential to end polio for good.”

Luo added with only one case of wild poliovirus reported so far in 2021, Afghanistan has an extraordinary opportunity to eradicate the crippling disease.

Restarting polio vaccination now is crucial for preventing any significant resurgence of the virus within the country and mitigating the risk of cross-border and international transmission.

“This decision will allow us to make a giant stride in the efforts to eradicate polio,” said Hervé Ludovic De Lys, UNICEF representative.

“To eliminate polio completely, every child in every household across Afghanistan must be vaccinated, and with our partners, this is what we are setting out to do,” he added.

A supplementary dose of vitamin A will also be provided to children aged 6 to 59 months during the upcoming campaign. The polio programme has started preparations to rapidly implement the nationwide vaccination campaign, which is a result of ongoing high-level dialogue between the UN and the Taliban leadership to swiftly and urgently meet the health needs of the people in Afghanistan. “This is not only a win for Afghanistan but also a win for the region as it opens a real path to achieve wild poliovirus eradication,” said Dr Ahmed Al Mandhari, WHO Regional Director for the Eastern Mediterranean. “The urgency with which the Taliban leadership wants the polio campaign to proceed demonstrates a joint commitment to maintain the health system and restart essential immunizations to avert further outbreaks of preventable diseases,” he said.

The overall health system in Afghanistan remains vulnerable. To mitigate against the risk of a rise in diseases and deaths, all parties have agreed on the need to immediately start measles and COVID-19 vaccination campaigns. This will be complemented with the support of the polio eradication programme and with outreach activities that will urgently begin to deliver other life-saving vaccinations through the national expanded programme for immunisation.

“The resumption of the polio campaign is a step closer towards achieving our shared hope of eradicating polio in the region,” the UNICEF representative believed.

The official called for ensuring that the vaccination campaign proceeded without disruptions and reaches every child, especially those who have never been vaccinated.

This is the only way to keep children across Afghanistan and Pakistan protected from this terrible virus,”,.

UNICEF Regional Director for South Asia George Laryea-Adjei called the safety and security of health workers a prime concern for the polio programme.

The Taliban leadership has expressed its commitment to the inclusion of female frontline workers and ensuring the safety of all health workers — an essential prerequisite for the implementation of polio campaigns.

WHO and UNICEF urged authorities and community leaders at all levels to uphold the neutrality of health interventions and ensure unhindered access to children now and for future drives.