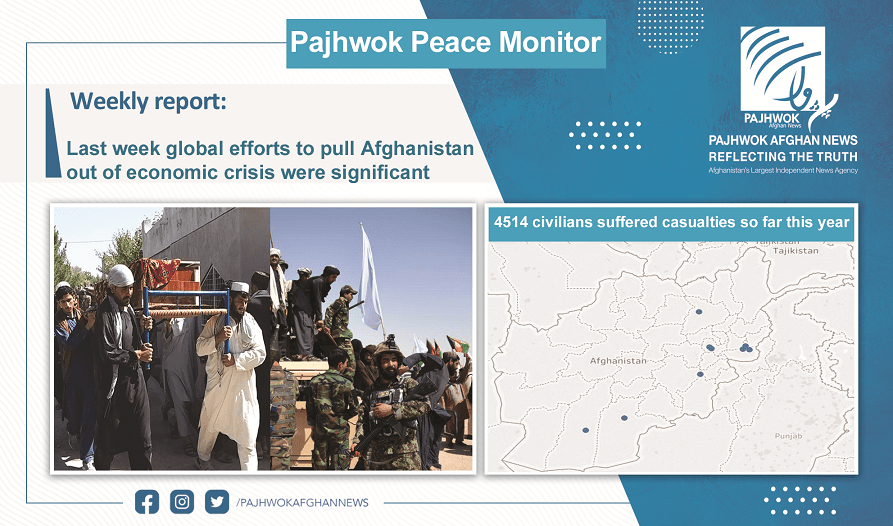 KABUL (Pajhwok): The international community continues its assistance to Afghanistan as the European Union termed relations with the incumbent Afghan government essential on the eve of a conference on Afghanistan in Islamabad.

On the other hand, 12 people were killed and 13 others injured in various criminal incidents and attacks in Afghanistan last week.

Last week, 12 people were killed and 13 others were injured in criminal incidents and attacks in Kabul, Nangarhar, Kandahar, Baghlan, Ghazni and Helmand provinces.

Reports say that at least two women were killed and three others, including a woman and a man, were injured in a bomb attack in Kandahar province on Friday. A man killed his wife in Pul-i-Khumri city, capital of Baghlan while a doctor was found dead in Ghazni city, the capital of Ghazni province.

Four people were injured in a rocket explosion in Garmsir district of Helmand province.

No group has claimed responsibility for these attacks so far. 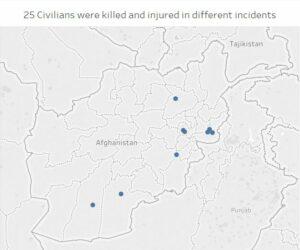 The week before last, seven civilians were killed and six others were injured in separate incidents across the country.

Following the fall of the previous Afghan government and its replacement by the current caretaker government, the US froze nearly $10 billion in Afghan capital and imposed some sanctions on Afghanistan, leaving the country in serious economic problems.

After political changes in Afghanistan, some countries and international organizations provided humanitarian assistance to the Afghan people which still continued during last week, but the US has not yet decided to unblock nearly $10 billion of Afghanistan assets.

Da Afghanistan Bank (DAB) or the central bank said last week that the United Nations would deliver about $20 million a week to Afghanistan until the end of March 2022 to address the cash crunch in Afghanistan.

The bank said that the fourth package of the aid ($19.2 million) had arrived in the country last week.

The US also said last week that it was providing one million doses of coronavirus vaccine to Afghanistan, bringing the total humanitarian assistance to Afghanistan to$474 million this year.

The World Bank said that donor countries have decided to provide $280 million in frozen funds to Afghanistan from the country’s Reconstruction Trust Fund, which will be shifted to two UN agencies, UNICEF and WFP.

The United Kingdom has pledged75 million pound in aid to Afghanistan, saying the money would be spent on health care, food and shelter for Afghans.

This comes as Pakistan’s Prime Minister Imran Khan, during a meeting with US senators last week, called for urgent assistance to Afghanistan to prevent the country’s economy from collapsing.

Russia has also called on the West to unblock frozen assets of Afghanistan in order to prevent the influx of Afghan refugees into Europe.

Afghanistan’s acting foreign minister, Mulavi Amir Khan Mottaqi, said that a weak government and instability in Afghanistan was not in anyone’s interest and that Afghanistan’s assets should not be unfrozen.

The European Union (EU) said last week that relations with Afghanistan’s current caretaker government was important, but added that legitimacy of the new administration was depended on its integrity and respect for human rights.

Pakistan said that a meeting of Islamic countries on Afghanistan scheduled for Sunday in Islamabad was aimed to facilitate humanitarian aid to millions of Afghans. However, the country says that the meeting did not mean to recognize the new Afghan administration.

Pakistan’s Foreign Minister Shah Mehmood Qureshi said that all members of Organization of Islamic Cooperation (OIC) had agreed to take part in the meeting which would be also attended by representatives from the US, China, Britain, Russia and France, who would discuss ways to rescue Afghanistan from humanitarian crisis.

The current caretaker government of Afghanistan has introduced SohailShaheen to represent Afghanistan in the UN, but the UN has not yet accepted him and said the seat will be held by Ghulam Mohammad Ishaqzai, who was introduced to the position by the previous administration.

However, after reports about the resignation of Ishaqzai published by some media outlets, Nasir Ahmad Faiq, deputy permanent representative of Afghanistan to UN, replaced Ishaqzai.

SuhailShaheen, who was introduced by the Afghan government as envoy to UN, in a tweet said, “UN is an August World Body and its credibility lies in its neutrality. I request it to prove its neutrality by giving the seat of Afghanistan at UN to the current government in Afghanistan which has sovereignty and writ all over the country.”

Had Ghani stayed, there would have been a peaceful transfer of power: Karzai

Former Afghan President Hamid Karzai said last week that he had submitted a proposal to the Afghan government to convene a Loya Jirga to decide on the formation of the next government, the constitution and the national flag.

He also said that after Ghani left Afghanistan in a sudden decision and secretly, he called on the Taliban, who had reached the gates of Kabul, to enter Kabul and control chaos.

Had Ashraf Ghani stayed in Kabul, a peaceful transition would have taken place through a deal, Karzai said.

He said it had been decided that power would be handed over to the Taliban through a Loya Jirga, but the Taliban preferred the government’s surrender.

Mohib said there had been no coordination or consultation with the US on Ashraf Ghani’s departure, and he said his departure was “100 per cent in Afghanistan’s interest”.

At the conclusion of a three-day campaign to end violence against women, a number of women’s rights activists in Kabul called on the government to provide jobs and education for women.