Last week, 17 people were killed and 16 others were injured in Afghanistan.Casualties from natural disasters are not included in these figures.

According to reports, unidentified gunmen shot dead a young man in Logar, a young girl was killed in Faryab province where a man also killed his sister-in-law.

Reports show that unidentified armed men killed a young man in Kandahar, another young man was killed in Zabul and a man killed his father-in-law and injured his mother-in-law in Ghazni province. Two children were killed and three others were injured in IEDs blasts in Ghazni and Farah provinces.

According to reports, four people have been injured in a dispute between two families in Uruzgan province where a drug addict killed his wife.

According to local sources, two armed robbers were killed in a clash with security forces in Herat province and another in Ghor province. 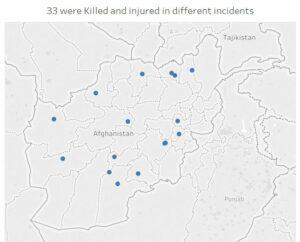 The week before last, 26 people were killed and 16 others were injured in Afghanistan.

This comes as before the regime change last year, hundreds of people would get killed and injured every week.

Efforts on for reopening of Japanese and Indian embassies in Kabul

Last week, Japanese ambassador to Kabul, Takashi Okada, saidhis country’s embassy in Kabul would reopen in the near future.

An Indian media outlet reported last week that the country was considering reopening its embassy in Kabul and was in talks with Afghanistan’s caretaker government on the regard.

Efforts for resolving problems through talks

He said that Afghanistan should not be allowed to collapse again and conflicts between the ‘Taliban and oppositions’ should not increase and problems should be solved through talks.

Deborah Lyons, the head of United Nations Assistance Mission in Afghanistan (UNAMA), also told Afghan officials that no one in Afghanistan supports war or armed oppositions.

She said that steps should be taken for reconciliation and formation of an inclusive government in Afghanistan.

Acting Interior Minister Sirajuddin Haqqani in an exclusive interview with CNN said that the current Afghan government does not term US as an enemy and wants better relations with the US and the world.

These politicians in a statement called on the caretaker government of Afghanistan to come to the negotiating table.

One of the participants of the meeting, speaking on condition of anonymity, told Deutsche Welle that the meeting was attended by 40 people and after nine hours of talks, they decided to first invite the current Afghan officials to negotiations or they would start armed opposition.

Afghan caretaker government’s officials last week said that they have created a commission to communicate with Afghan figures abroad and encourage them to return.

However, they say that no one would be allowed to try for creating armed groups in Afghanistan.

Continuation of foreign assistance to Afghanistan

The World Bank (WB) says it has approved $150 million in assistance to the Afghanistan Ministry of Public Health.

Iranian envoy to Afghanistan, BahadarAminyan, last week said that if Afghanistan meets its agricultural needs, the country will stop importing agricultural products from other countries.

The Ministry of Vice and Virtue last week asked television channels to ensure female presenters cover their faces except the eyes when on air.

The ministry said that the hijab order was announced earlier, but had not been implemented in the media for the past two weeks, so it directly asks media to implement the order.

A number of female students at Paktia University in a gathering last week said that hijab was a national and religious value for Afghan women and supported the government’s decision on the regard.

The Afghan caretaker government announced the dissolution of the Human Rights Commission, High Council for National Reconciliation, the Independent Commission for overseeing the implementation of the Constitution, the Secretariat of the Wolesi Jirga and National Security Council.

Heather Barr, deputy director of the Human Rights Watch for Afghanistan, said the dissolution of the mentioned institutions was an attempt to escape from human rights in Afghanistan.

UNHCR commissioner,Michelle Bacheletsaid in a statement that she was “shocked” by the dissolution of Afghanistan Independent Human Rights Commission (AIHRC).

Deputy government spokesman,InamullahSamangani said that the budget for current fiscal year was based on ground needs and only those institutions that were functional and needed were considered in the budget. He said that the mentioned organs were not included in the budget and were not dissolved, but they may be reactivated in the future when needed.