Casualties in Afghanistan down by 73pc last week

Casualties in Afghanistan down by 73pc last week

KABUL (Pajhwok): The presence of US aircraft in Afghanistan airspace and an American judge’s recommendation that victims of the 9/11 attacks not be allowed to seize billions of dollars of assets belonging to Afghanistan’s central bank hogged headlines last week.

Fifteen individuals were killed and seven others injured in different violent incidents in the country last week.

Three civilians and an individual carrying explosives were killed in a blast in Mazar-i-Sharif, the capital of northern Balkh province. Two robbers were killed during an exchange of fire with security forces last week, according to reports.

In Badghis, a man killed his neighbour before the murderer was gunned down during an exchange of fire with security forces.

Security force killed two robbers in Kabul during a clash, says a report.

In Faryab, a man killed his sister along with her lover over their alleged illicit relationship. In Farah, a woman killed his father-in-law and in Badghis another woman shot dead her husband. During investigations, the woman insisted she had killed her hausband unintentionally.

According to reports, a woman axed her neice to death and wounded her husband. A militant commander was killed in Samangan while two people were gunned down in Paktia over a land dispute.

Reports said Iranian security forced killed an Afghan on the border between the two nations.

The casualty figures were obtained from reports available to Pajhwok Afghan News. However, there is a possibility of reports regarding some violent incidents being missed or sources not providing exact casualty figures. 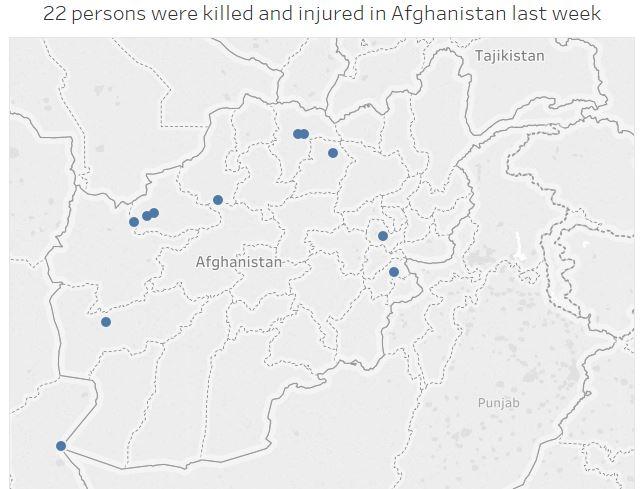 Hudreds of people were killed and injured every week in the country before the regiem change on August 15, 2021.

US aircraft flying over Afghanistan

IEA spokesman Zabihullah Mujahid told reporters last week tthat US aircraft continued flying over Afghanistan — a violation of the country’s airspace that must be stopped.

He said the issue had been discussed with American officials, who were asked to resolve issues through direct talks.

US Secretary of State Antony Blinken said efforts would continue to prevent Afghanistan from becoming a terrosit safehaven again.

Gulbuddin Hekmatyar, leader of the Hizb-i-Islami Afghanistan (HIA), claimed: “Long been seen in Afghanistan’s airspace, foreign planes have fired missles at severl targets. In all these attacks, the one carried out in Sherpour has been reflected.”

He believed silence overUS violations of Afghanistan’s airspace had further emboldened the Americans to continue with pursuing their mission in Afghanistan.

On July 30, US President Joe Biden annouced the killing of al-Qaeda leader Ayman Al Zawahari in a CIA drone strike in Kabul.

Earelir, Afghanistan’s interim government had announced it was investigating the incident. But last week, the IEA spokesman said al-Zawahari’s killing was still a claim.

After the collapse of the previous government last year, the US froze over $9 billion of Afghanistan’s foreign assets. Seven billion dollars of the assets are in the US and the remining in banks in other nations.

Recently, the US announced that it was planning to unfreeze three billion dollars of the frozen assets on humanitarian grounds.

Some months back, the US president said that $3.5 billion of the assets would be distributed to victims of the 9/11 assaults.

On Friday, a US judge recommended that victims of the September 11, 2001 attacks not be allowed to seize billions of dollars of assets belonging to Afghanistan’s central bank to satisfy court judgments they obtained against the Taliban.

Last week, Indian Defence Minister Rajnath Singh stressed the formation of an inclusive political system in Afghansitan. He said all counties should respect Afghanistan’s sovereignty and avoid interfering in its internal affairs. He said India desired a stable, peaceful and secure Afghanistan. Russian Defence Minister Sergei Shoigu said the situation in Afghanistan was unstable because networks like al-Qaeda and Daesh were expanding their presence there.

But IEA spokesman Zabihullah Mujahid said Daesh had been eradicated from Afghanistan. Regional countries, including Russia, should not be worried in this regard, he commented.

According to reports, travel waivers for 13 IEA leaders ended on August 21. AP reported citing -ranking diplomats that Russia and China supported regular extentions in the travel ban exemptions for the 13 IEA leaders.

But the US recomanded that seven of the 13 IEA officils should be banned from traveling and the remaining six officials should be granted waivers for three more moths.

The US and some Western nations supported their stance on the basis of the acting government’s continued ban on girls’ education, violation of women’s rights, denial on reching a conclusion in talks and its refusal to set up an inclusive government.

The Chinese enovy at the UN, Zhang Jun called for more efforts by the acting government in Afghanistan to improve the human rights situation, including the rights of women and girls.

He said: “I can’t say that we should work for the ruling elites of Afghanistan but they should be allowed an opportunity so that they could work with the international community and interact with other countreis.”

The Afghan government has rejected these sanctions uncessary and asked the UNSC not to use the curbs as tool of coercion.

Statements on closure of girls’ schools

In late March, the new academic year started and the acting government stopped intermediate and high schools for girls reopening. Authorities said a stategy was being worked out for the reopening of girls’ schools. This plan is yet to be devised.

Former president Ashraf Ghani, in a recent interview, said he would return to the country when ell Afghans felt connected to their homeland and all compatriots, inclusing women and youth, had a role in national affairs.

The United Nations High Commissioner for Refugees (UNHCR) has expressed its grave concern about the plight of girls and women in Afghanistan, saying their rights must be preserved for the sake of a bright future of the country.

EU special representative for Afghanistan Thomas Nicholson has said the opening of girls’ schools in Afghanistan is a priority and other human rights issues will not be respected until schools are opened.

But Sohail Shaheen, spokesman for the Islamic Emirate in Qatar, said they were not against girls’ education.

He said currently 450,000 students are stadying in private and public universities and millions of girls had been enrolled in sixth grade. He added women in Afghanistan were working at various ministries, including education, higher education and heatlh ministries.

Amnesty Internatioanl has accused the caretaker government of violating human rights, saying it has launched a justice campaign.

But Zabihullah Mujahid said propaganda in this regard was not ture and the rights of men and women in Afghanistan were better preserved today.

Offcials of the caretaker government have repeatedly said they are giving women all their rights within the framework of Islamic Shariah. At the moment, they said, women were busy working for istitutions where they were needed.

India delivered the 10th batch of medical aid to Afghanistan as part of its ongoing humanitarian assistance programme.

According to the news website Firstpost, the Indira Gandhi Hospital in Kabul was handed over the latest medical assistance.

The Organization of Islamic Cooperation has promised, with financial support from the King Salman Charitable Foundation, it will deliver essential food items to more than 47,000 Afghan families affected by natural disasters.