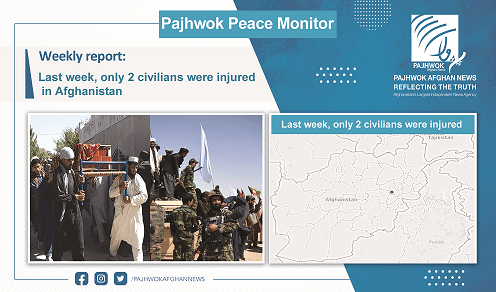 KABUL (Pajhwok): Last week, the United States insisted on accepting the recommendations of the international community for the recognition of the new Afghan administration.

There were two explosions in capital Kabul last week.

According to reports, two civilians were injured in a roadside bomb blast near Education University in in the fifth police district of Kabul city last week.

A landmine blast occurred near the 11th police district of Kabul, but no casualties were reported.

No group has claimed responsibility for the explosions. It is the lowest weekly casualty rate in years. 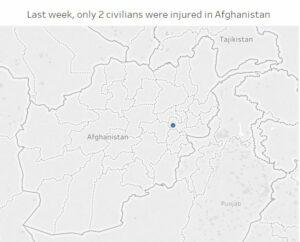 According to reports, one person was killed and three others were injured in Kabul and Panjshir provinces the week before last. This comes as hundreds of people were killed or injured every week in past wars in Afghanistan.

Recognize and interact with the world

The US State Department says if Afghanistan’s caretaker government wants the international community to recognize it, it should bring ‘reforms’ in its policies.

The source said sanctions on the Taliban would continue until the international community’s recommendations were implemented.

The US State Department says the recommendations included human rights, freedom of individuals, prevention of revenge attacks and the fight against extremism.

Gen. Nick Carter, former head of the British Armed Forces, reiterated that the West should engage with the new Afghan government for the sake of assisting the Afghan people.

He said that the Taliban should be persuaded to change the current form of government and form an inclusive administration.

Iran’s foreign ministry says it has not yet reached the point to recognize Afghanistan’s caretaker government. The source said the Taliban should take steps based on the request of people to be recognized by the international community.

The Afghan Foreign Ministry said that under the Doha Peace Agreement, the US had promised to keep its embassy in Kabul open after the withdrawal of its forces and to recognize the Afghan government, but the US backtracked from the agreement.

Meanwhile, the Afghan government says that in 2022, its efforts will be focused on self-reliance in Afghanistan and interaction with the world.

On the other hand, a large number of people protested in Kabul, demanding recognition of the Afghan government by the international community and the release of nearly $10 billion in frozen assets of Afghanistan in the US.

The United Nations says it received $1.5 billion in aid last year to help Afghans in need.

The World Health Organization (WHO) says it has donated equipment to 40 coronavirus diagnostic centers in Afghanistan.

On the other hand, 500,000 doses of coronavirus vaccine donated by India arrived in Kabul and the country will provide another 500,000 doses of the vaccine to Afghanistan in the coming weeks.

Indonesia reiterated its commitment to providing humanitarian assistance to Afghanistan and would soon send two humanitarian aid planes to Kabul.

Last week, Pakistan began installing and repairing medical equipment worth two billion Pakistani rupees in Afghanistan, while a number of traders in Pakistan’s Karachi city donated more than 85 tonnes of food and other items to Afghanistan.

Reports say Pakistan’s National Security Adviser and his delegation will visitAfghanistan in the near future. According to reports, the delegation will hold talks with Afghan officials on the implementation of Pakistan’s five billion rupees worth of humanitarian aid to the Afghan people.