KABUL on peace at a price that is about 440,000 afghanis higher than the average market rate. Additionally, no bids were called for buying the fans.

With 20 of the fans have been missing from the warehouse, 130 others were purchasedat an inexpensive rate from a different company, an investigation by Pajhwok Afghan News reveals.

The massive tribal assembly convened on August 7 this year in the Loy Jirga prisoners.

On the Loya Jirga’s recommendation, the government freed the Taliban prisoners and the way for the start of intra-Afghan peace talks in Qatar was thus paved.

Information from the Operation and Support wing of the National Development Authorityat the Presidential Palace, tasked with calling the Loya Jirga into session, indicates that over 173 million afghanis were spent on arrangements for the jirga.

A document available to Pajhwok Afghan News reveals that the Operation wing of the National Development Authority, in addition to other expenditure, purchased 1,000 pedestal fans under a contract with MasehMosawir Company.

One pedestal fans was bought for 3,050afs. A total of 3.5 million afswere provided for the purchase of the fans. Of the remotely-controlled pedestal fans, 20 no longer exist in the warehouse of the Loya Jirga hall.

As per information, 850 of the fans have been manufactured by the Pak Fan Company and 130 by 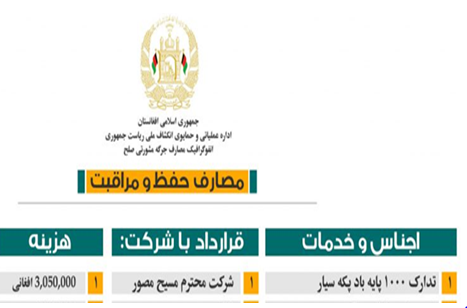 Meanwhile, the Saadul Hassan Alikhel Company,which holdsa monopoly over the import of Pak Fan products, said the wholesale price of a remote-controlled pedestal fan was 2,550afs.

Taking into the account the average price and that provided by the Ali Khel Company, the rate of one Royal Company fan is 2,625afs. Thus 13,000afs could have been saved in purchasing 130 fans from the Royal Company because of the price differential. Calculations show all fans were purchased at a rate that is 438,000afs higher than the average market rate.

A source wishing not to be named, meanwhile, claimed one fan was purchased for $31, about 2,400afs. The list, however,suggests one fan accounted for 3,050afs.

In addition, an audio clip available to Pajhwok confirms a businessman’s claimthat he sold 1,000 pedestal fans to Presidential Palace department at a decent price.

Mohammad Masih Payenda, administrative and logistic director of the Masih Mosawir Company,insisted that the prices were not higher, given the amount of tax they paid. His firm was bound to pay 14 percent of the contract value to the government in tax, he argued.

He said that on pedestal fan was bought at the cost of 3,050afs when the weather was very hot during August compared to now in October and the supply of fans was the responsibility of Maseh Mosawir Company as well.

But Masih Payenda did not name the firm that sold the pedestal fans to the government. His company was given the contract for purchasing the fans because it had offered the lowest prices.

Hujatullah Muiaddedi, spokesperson for the Operation wing of the National Development Authority at the Presidential Palace, said the contracting company had purchased pedestal fans from different sources due to the shortage of time.These fans were bought one day before the deadline.

“If we had got enough time, we would definitely have asked an importing company to provide us with 1,000 pedestal fans at a reasonable price. But we can say for sure that all possible efforts were made to ensure the taxpayer money is not wasted.”

Mujaddedi reasoned wholesale and retail prices vary, as contracting companies were required to pay taxes in line with the existing law of the land.

Referring to the fact that the pedestal fans were not purchased based on a bidding process, Muiaddedi said due to the shortage of time, national interest and in line with Presidential Order No. 1106m dated August 6, procurement of goods, consulting and non-consulting services, construction and other expenses related to the jirga are paid in cash.

He argued the implementation of procurement-related matters through bidding required more time. As a result, all procurement segments related to the jirga were conducted under a ‘framework agreement’.

A source in the procurement profession disclosed ‘framework agreements’ were concluded in the emergency situations in which a contract was signed without bidding and only a few companies with experience in the field were asked to provide quotations.

In line with procurement laws and code of conduct, the source said, it was no big issue because such things were done in an emergency situation.

He, however, explained that the relevant law preferredcalling bids. Such projects should be implemented on the basis of bidding, the source opined.

This Pajhwok reporter, during visit to the warehouse of the Loya Jirga hall, saw 980 fans. Muiaddedisaid the 20 fans were at the Polytechnic University guesthouse. But another source in the Loya Jirga hall believed the 20 missing fans could have been stolen.

State of the 130 different pedestal fans:

A well-placed source proposed the purchasing company should have bought fans made by the Pak Company. However, the authorities concerned chose to buy 130 fans manufactured by the Royal Company.

On the other hand, Muiaddedi said names of the companies from which fans had been purchased were mentioned in the contract and both firms producedfans of the same quality.

According to the Usman Nawid Store on the Nader Pashtoon Avenue, the price of one remote-controlled Pak Fan is 2,700afs while the same product of the Royal Company accounts for 2,600afs.

Muiaddedi, however, said: “Based on principles, we cannot name the manufacturer. The contractor purchased the two types of fans from the two different companies with approval from the quality inspection team.”

Masih Payenda, logistic director of the company, said the procurement and purchase of fans was conducted in coordination with organisers of the Loya Jirga. Buying 1,000 fans from one company in a day was not possible, he continued.

Some Loya Jirga participants said one or two fans were made available to each working group. A total of 50 working groups were formed. Some fans were also placed in the dining room. The number of fans used during the Loya Jirga was probably less than 1,000, they reckoned.

This Pajhwok reporter found that some of the fans in the warehouse were still packed in cartons.

However, Muiaddedi said 600 fans had been placed in Polytechnic University rooms for guests.The remaining 400 were provided to the Loya Jirga hall, dining room and the Jirga Secretariat. Most of these fans were used and some kept reserved.