KABUL (Pajhwok): Casualties fell eight-fold in Afghanistan last week compared to the previous week while statement of a government official regarding the reopening of all girls’ schools was welcomed by the Afghan people.

At least six people were killed and as many others were injured in Afghanistan last week.

The death toll does not include casualties caused in natural disasters.

According to reports, a woman was killed and three other civilians were injured in a car bomb blast in third police district of capital Kabul.

Reports say unidentified gunmen killed two civilians in Uruzgan province and a child was killed and two others were injured in an IED blast in Helmand province.

Crime branch chief of Tala wa Barfak district of Baghlan and an official of the province’s power utility were shot dead by unidentified gunmen. 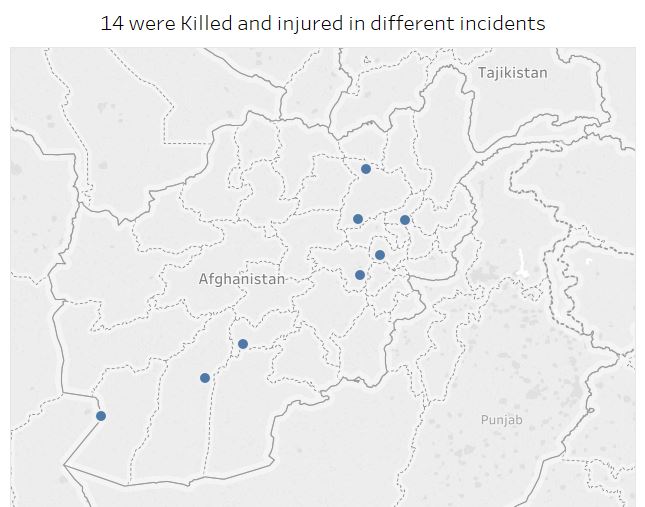 At least six people were killed and eight others were injured in Afghanistan the week before last.

All should work for prosperity, not for destruction and death: Ghani

Former Afghan President Ashraf Ghani in his Eid message said that Afghanistan is facing a dangerous situation and the only way out of the current situation is national unity.

He said, “All Afghans should speak about the national unity and come to a roadmap to achieve the goals of a prosperous and free Afghanistan and to work together for development of the country and not destruction and death.”

Iranian foreign ministry hoped an inclusive government and the acceleration of the fight against “terrorism” would help provide a wider ground for neighbors and regional cooperation with Afghanistan.

Last week, leaders of France and India called for formation of an inclusive government in Afghanistan and pledged their support for a peaceful, secure and stable Afghanistan.

This comes as Afghan officials say that the current caretaker government is inclusive and efforts are underway to make it more comprehensive.

Last week, US Special Representative for Afghanistan Thomas West, Dr. Abdullah Abdullah and Shaharzad Akbar, former head of Afghanistan Independent Human Rights Commission, talked in a telephonic conversation about national political issues and the international community’s engagement with Afghanistan and it continued support to the country.

Reports say that a high-level Afghan delegation traveled to Qatar to discuss the technicalities of the contract for Afghanistan’s five international airports.

Afghan Ministry of Foreign Affairs (MoFA) says that talks with Qatari officials on the provision and extension of standard operational services at Kabul, Mazar-i-Sharif, Kandahar and Herat airports in Qatar had come to a fruitful conclusion.

Acting foreign minister Mualvi Amir Khan Mottaqi in a meeting with Qatari development and social affairs minister Maryam Al-Musnad invited her to visit Afghanistan to meet with women, orphans and people with disabilities.

Schools for all girls to reopen soon: Haqqani

All girls’ schools were expected to open at the beginning of 1401 solar year, but the Afghan caretaker government delayed the schools’ opening until further notice. The Ministry of Education says it has worked on a plan to reopen the schools after approval from the leadership of the government.

Closure of schools drew reactions at home and abroad.

AnasHaqqani, an adviser to the Ministry of Interior in a gathering in Khost province saidthat schools would be opened to all girls in the near future.

He said that government would never ban something that is not forbidden in Islam and Sharia. He added a meeting of religious scholars and professionals would be convened in the near future to reopen all schools for girls.

Qudsia Aziz, a teacher at Zaman Khan Qala Girls’ High School in Kabul, said, “I as an old teacher was very worried about the closure of schools… a few days back, we heard that Mr. AnasHaqqani said that girls’ schools of higher grades would be opened soon, the announcement made us very happy.”

Nazifa, a teacher at Abu Raihan Al-Biruni Girls’ High School in Kabul, said delays in opening of girls’ schools beyond the seventh grade were not justified.

She said that teachers, students and families were sad about the closure of schools and they hoped the schools would be reopened soon.

“A few days ago, we heard from the media that AnasHaqqani had said that all girls’ schools would be reopened. This hopeful announcement made all of us happy,” she said.

Former President Hamid Karzai, during talks with the US Special Representative for Afghanistan, reiterated his call for the immediate reopening of girls’ schools in the country

Former President Ashraf Ghani, in his Eid message, also referred to the situation of girls and boys education in Afghanistan and stressed the need to learn from the experiences of other countries in this regard.

ReenaAmiri, US special envoy for Afghan women and human rights, said that she had asked representatives of a number of Islamic countries to raise their voice for the reopening of girls’ schools in Afghanistan.

United Nations Children’s Fund (UNICEF) has also expressed concern about delays in the opening of girls’ secondary and high schools in Afghanistan.

Continuation of humanitarian aid to Afghanistan

Da Afghanistan Bank (DAB)saysthat more than $760 million in international aid has flowed into Afghanistan since the establishment of the new government in August last year.

Meanwhile, World Food Program (WFP) and the United Nations Assistance Mission in Afghanistan (UNAMA) said they would continue to support, assist and partner with Afghans for stability, long-term peace and a prosperous future for all.

Russia also said last week that it was interested to cooperate directly with Afghanistan in the fields of agriculture, transit and energy.