KABUL (Pajhwok): At least 40 people were killed and wounded in violence in Afghanistan last week, when a global meeting on Afghanistan was held in Tashkent, and some sources once again asked the government to allow girls high and secondary education.

Last week, 17 people were killed and 23 others were injured in Afghanistan in separate incidents of violence.

Yesterday, a bomb blast killed two people and injured another 13 in Kabul. The emergency hospital in Kabul confirmed receiving 13 injured people from the scene.

Four people were killed in two explosions of unexploded ordnance in Uruzgan and Zabul provinces, and eight others were injured in Zabul.

Reports say unidentified gunmen killed a civilian in Parwan, a girl was injured as a result of a shooting in Takhar, and one person was killed and another injured in a vegetable market in Ghazni city.

The body of a six-year-old girl who was stoned to death in Paktia has been found.

Paktia Police said three suspected individuals had been arrested in connection to the stoning and murder of minor girl and referred to judicial organs for investigation, nor more detail had been disclosed in this regard. 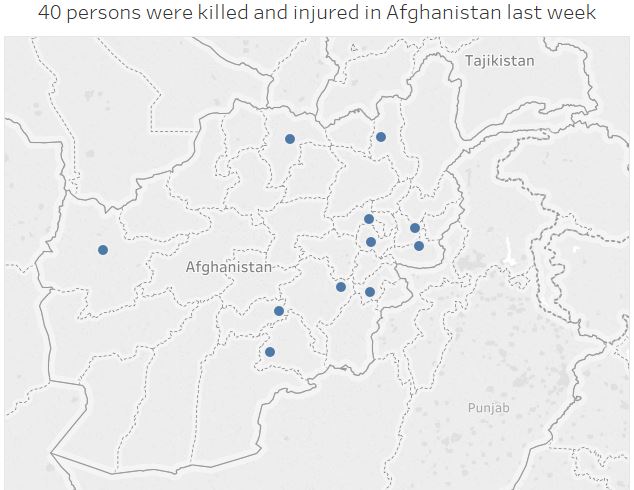 In the previous week, 10 people were killed and one injured in Afghanistan.  In the past conflict before August 15 last year, hundreds of people would get killed and injured in a week.

Last week, Russia’s special representative for Afghanistan said the number of Daesh militants in Afghanistan has reached 6,000. But the caretaker government rejected the claim and said Daesh presence has reached close to zero and the rest are being suppressed.

Last week, a day-long international conference on Afghanistan was held in Tashkent, the capital of Uzbekistan, and representatives from  20 countries and organizations, including Pakistan, Russia and the United States , participated in it.

A delegation of the caretaker government of Afghanistan also attended the meeting  that ended with the release of a statement by the host country, Uzbekistan.

The declaration asked the Taliban to form an inclusive government , pay attention to the rights of women, and to give all Afghan girls the right to have access to education, emphasizing that these were the “basic conditions for the completion of the national reconciliation process in Afghanistan.”

According to the BBC, the Taliban government called the Tashkent meeting a success while the international community reiterated its previous conditions.

The declaration was not only confined to political statements, but focused on strengthening peace, stability and economic reconstruction, which  will benefit Afghans, Afghanistan’s neighbors and the entire international community.

At the meeting, the United States and the Afghan side talked about the release of the frozen money of Afghanistan. The American side said how to use three and a half billion dollars from Afghanistan’s frozen money for the benefit of Afghans.

In the meeting, the representative of Russia, Zamir Kabulov, criticized Afghanistan’s freezing of about seven billion dollars. Keeping in view the economic situation of Afghans, he said , the United States has committed “theft” by freezing the money.

The head of the Afghan delegation and Acting Minister of Foreign Affairs Maulvi Amir Khan Muttaqi said that the meeting was useful and positive developments were  made in many areas.

Muttaqi said in the meeting that the new government of Afghanistan wants the country to become a center of peace, stability and economic cooperation.

The Afghan delegation met with representatives of different countries in Tashkent and talked about key projects, especially the Termez-Mazar-i-Sharif-Kabul-Peshawar railway project,  the release of Afghanistan’s frozen assets and the production of electricity.

Pakistan Foreign Minister Bilawal Bhutto said in his meeting with his Chinese counterpart Wang Yi in Tashkent that his country wants the China-Pakistan Economic Corridor or CPEC project to be extended to Afghanistan.

Last week, the European Union and Pakistan insisted on interaction with Afghanistan, but the US State Department claimed that the Taliban government had not fulfilled its promises with the international community and Afghans.

Last week, Pakistan president Arif Alvi said the Afghan girls and boys should be provided education through the internet or television, saying Pakistan would pave the way for their education through Allama Iqbal Open University and other  public sector universities.

The US Secretary of State once again asked the caretaker government of Afghanistan to allow secondary education for girls, and a number of religious scholars and tribal leaders of Paktia and Parwan also asked the government to allow girls above the sixth grade.